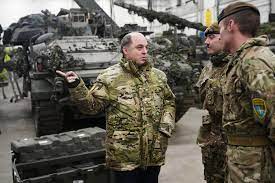 TAPA, Estonia (AFP): Britain on Thursday said it would send 600 Brimstone missiles to war-torn Ukraine to help its fight against Russian forces.

British Defense Minister Ben Wallace made the announcement after attending a donor meeting with several of his counterparts at Estonia’s Tapa military base.

“Today I can say we’re also going to send another 600 Brimstone missiles into theater, which will be incredibly important in helping Ukraine dominate the battlefield,” he told reporters.

Britain made its latest pledge just days after it became the first country to meet Ukraine’s request for Western heavy tanks.

Wallace and his Estonian counterpart Hanno Pevkur initiated the donor meeting in Tapa, which was attended by representatives from several Ukraine allies.

The talks will be followed Friday by a larger meeting of around 50 countries convened by the United States at the US-run Ramstein military base in Germany to discuss military aid to Ukraine.

“Now we are here today and will be there tomorrow in Ramstein… to make it very clear to (Russian) President Vladimir Putin that we will continue to donate, continue to train and continue to stand by Ukraine,” Wallace said in Estonia.

“Because if President Putin is banking on us getting bored this year, he is wrong. We will plan for this year, and next year, and the year after, and beyond… we are in it for the long haul,” he added.

“In 2023, it’s time to turn the momentum that the Ukrainians have achieved in pushing back Russia into gains and making sure that Russia understands the purpose now is to push them back out of Ukraine and to restore Ukraine’s sovereignty,” he said.