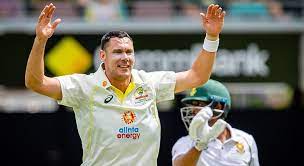 Melbourne (AFP): Australian seamer Scott Boland was Sunday confirmed to start the Boxing Day second Test in Melbourne ahead of an “underdone” Josh Hazlewood, while South Africa suggested they could shake up their batting line up.

Boland replaced injured fast bowler Hazlewood in the opening Test at Brisbane and was a key performer with his red-hot form making him virtually undroppable.

He is now assured of another game on his home ground — where he took an incredible 6-7 on debut against England a year ago, cementing himself into Ashes folklore.

Skipper Pat Cummins told reporters the team was unchanged from the side that won by six wickets inside two days on a hostile bowler-friendly Gabba pitch in Brisbane last week, the first of a three-match series.

“We gave Joshy every chance, (but) it just got to a stage where (he) more than anyone else felt like he was a little bit underdone,”
he said.

“It’s a mark of the man really, he himself said ‘don’t feel quite right’, so he kind of pulled himself out of selection.
“We talk a lot about how (as) a team we need a squad mentality, and I think it’s another great example.”

Hazlewood missed Australia’s last two Tests in Adelaide and Brisbane due to a side strain but had been training hard in the build-up to Melbourne, where hot and humid conditions are expected.

Boland has taken 25 wickets at 10.33 since his debut at the MCG a year ago and said Friday he was hoping his local knowledge would give him the edge over Hazlewood.

The Boxing Day Test will be David Warner’s 100th, with the opener striving to end a lean run that has seen some question his position in the side.

“This might be a wicket where I can go out and play like the old me,” he said.

After his batsmen largely failed to fire in Brisbane — where they were bowled out for 152 and 99 — South African captain Dean Elgar said a change could be afoot.

He was not willing to go into details, although middle-order batsman Theunis de Bruyn has been tipped to come in.
“The little bit I can give away is our bowlers retain their spots,” he said.

“There’s probably a change amongst the batters.”

South Africa’s batting struggles in Brisbane followed some poor displays earlier in the year, with only Sarel Erwee and wicketkeeper Kyle Verreynne making centuries since the start of the 2021/22 season.

Despite this, batting coach Justin Sammons backed them to come good as the series progresses.

“We’ve got to keep the belief and the players do have the belief,” he said.

“We haven’t played to our potential in the last couple of Tests and we are also determined to get it right. The guys are out there doing their best behind the scenes and I’m confident that they are going to get it right.”