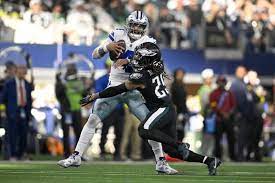 Washington (AFP): Dak Prescott threw for 347 yards and three touchdowns to spark the Dallas Cowboys over NFL-best Philadelphia 40-34 on Saturday, keeping the Eagles from clinching a top playoff seeding. The Cowboys’ defensive unit forced four turnovers and seized command late in a deadlocked game to stun the visiting Eagles (13-2).

“This was a huge game, not only beating one of the best teams in the league, but the way we did it,” Prescott said. “Just being able to make some plays right there at the end, scoring a lot of points, the defense making stops. We can use this and continue to build.” The victory kept Dallas, 11-4 in the NFC East division title hunt and Minnesota, 12-3, moved closer in the fight for the NFC top seed and a first-round playoff bye. The Baltimore Ravens clinched a playoff berth on a day where most games were played in severely cold conditions, while the New York Giants missed a chance to clinch a post-season spot on a last-play loss at Minnesota. Prescott completed 27 of 35 passes and kept his poise after having an early interception returned for a touchdown. “It was just about moving on,” said Prescott.