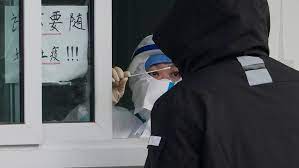 OTTAWA (AFP/APP): Canada said Saturday it would require travelers arriving from China to show a negative Covid-19 test, following similar moves by the United States and others.
Given the rapid rise in coronavirus infections in China, Canada will require travelers boarding a flight from China to show a negative Covid test taken no more than two days before their departure with their boarding pass, according to a statement.
Ottawa said the measure was “in response to the surge of Covid-19 in the People’s Republic of China and given the limited epidemiological and viral genomic sequence data available on these cases.” The rule will come into force from January 5 and be reassessed after 30 days. After nearly three years, China has said it will drop stringent foreign travel curbs next week — despite surging cases, and amid concerns over the accuracy of its data reporting. The Canadian government said it would also test wastewater from all international flights landing in Toronto or Vancouver to monitor for new variants.