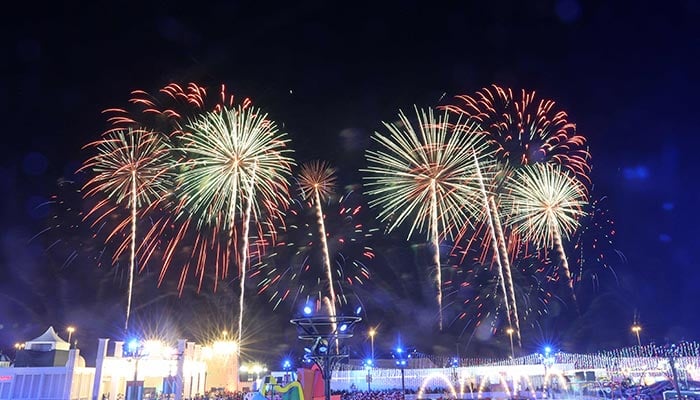 PARIS (AFP/APP): The world’s eight billion people Saturday ushered in 2023, bidding farewell to a turbulent 12 months marked by war in Europe, stinging price rises, Lionel Messi’s World Cup glory and the deaths of Queen Elizabeth, Pele and former pope Benedict.
Many were ready to set aside pinched budgets and a virus that is increasingly forgotten but not gone, and embrace a party atmosphere on New Year’s Eve after a few pandemic-dampened years.
Parisians — and a “normal” amount of tourists, comparable to 2018 or 2019, according to officials — took the opportunity to crowd together shoulder-to-shoulder for a fireworks show along the Champs-Elysee.
Police said about a million people showed up for the celebration, where children in pushchairs and partiers with champagne were equally visible.
A group of 10 students sat around playing games while they waited for midnight, spending their first New Year’s Eve on the avenue.
“We’re here for the ambiance, to have a good time and to be together,” said 19-year-old Ilyes Hachelef. “And it’s beautiful!” Hours earlier, Sydney became one of the first major cities to ring in 2023, restaking its claim as the “New Year’s Eve capital of the world” after two years of lockdowns and coronavirus-muted festivities in Australia. “It’s been a fairly good year for us; getting past Covid of course is great,” David Hugh-Paterson, 52, told AFP as he waited in to watch a 12-minute fireworks display over the Sydney Harbour Bridge.
For some, 2022 was a year of Wordle, the Great Resignation, a new Taylor Swift album, an Oscar slap and billionaire meltdowns.
It also saw the deaths of Queen Elizabeth II, Brazilian football icon Pele, Mikhail Gorbachev, Jiang Zemin, and Shinzo Abe. Former pope Benedict XVI also died on New Year’s Eve. The global population surpassed the historic milestone of eight billion people in November.
But 2022 is most likely to be remembered for armed conflict returning to Europe — a continent that was the crucible of two world wars.
“It was our year. Year of Ukraine,” President Volodymyr Zelensky said in his nightly address Saturday, reflecting on his country’s war effort throughout the year.
More than 300 days into Russia’s botched invasion of Ukraine, about 7,000 civilians have been killed and 10,000 more injured, according to the Office of the UN High Commissioner for Human Rights.
About 16 million Ukrainians have fled their homes.
For those who remain, an 11:00 pm to 5:00 am curfew will be in place amid periodic blackouts and Russian missile barrages.
The latest Russian strikes on Ukraine Saturday claimed at least one more life and wounded several others, said Ukrainian officials, while an explosion was heard in Kyiv just after the New Year. “We do not know for sure what the new year 2023 will bring us,” Zelensky said, promising that Ukrainians would fight on and offering a wish for “victory” in the new year.In Kyiv, filmmaker Yaroslav Mutenko, 23, was defiant after a shell hit the four-star Hotel Alfavito near his apartment, insisting the blast would not stop him going to a friend’s to party.
“Our enemies, the Russians, can destroy our calm but they cannot destroy our spirit,” he said.
There seemed to be a dulled appetite for grand celebrations in Vladimir Putin’s Russia.
Moscow cancelled its traditional fireworks show after Mayor Sergei Sobyanin asked residents to vote on how to mark the occasion.
Muscovites such as Irina Shapovalova, a 51-year-old nursery worker, said their main wish for 2023 was for “a peaceful sky above our heads”. Putin said in a New Year’s address that “moral, historical rightness” is on Russia’s side as the country faces international condemnation over the war.
London was meanwhile welcoming crowds to its official New Year’s Eve fireworks display for the first time since the pandemic with around 100,000 ticket holders expected to attend the spectacle.
Thousands of people gathered in Madrid’s Puerta del Sol square to listen to the twelve chimes that accompanied the last twelve seconds of 2023 and eat a grape to the rhythm of each one, fulfilling a rite that most Spaniards copied at home from the television.
The new year will kick off with a new leader in Brazil, where Luiz Inacio Lula da Silva takes the reins on Sunday following his razor-thin win in October polls. The Middle East region welcomed 2023 with a traditional fireworks show from the world’s tallest building, the 830-metre (2,723 feet) Burj Khalifa in Dubai, United Arab Emirates.
Laser lights added to the spectacle at the landmark which carried messages including, “Hugging again,” an apparent reference to the end of Covid restrictions. However, China begins 2023 battling a surge in Covid infections after unwinding restrictions to contain the virus.
Hospitals in the world’s most populous nation have been overwhelmed by an explosion of cases following the decision to lift strict “zero-Covid” rules. New Year Eve’s parties are still planned, though authorities in Shanghai said there were no formal activities on the city’s famed Bund waterfront. Chinese President Xi Jinping told the country in a televised New Year’s Eve address that, despite the outbreak, “the light of hope is right in front of us”.