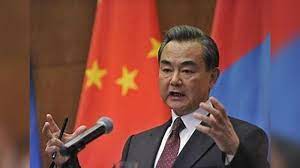 BEIJING (AP): Chinese Foreign Minister Wang Yi defended his country’s position on the war in Ukraine on Sunday and signaled that China would deepen ties with Russia in the coming year.

Wang, speaking by video to a conference in the Chinese capital, also blamed America for the deterioration in relations between the world’s two largest economies, saying that China has “firmly rejected the United States’ erroneous China policy.”

China has pushed back against Western pressure on trade, technology, human rights and its claims to a broad swath of the western Pacific, accusing the US of bullying. Its refusal to condemn the invasion of Ukraine and join others in imposing sanctions on Russia has further frayed ties and fueled an emerging divide with much of Europe.

“With regard to the Ukraine crisis, we have consistently upheld the fundamental principles of objectivity and impartiality, without favoring one side or the other, or adding fuel to the fire, still less seeking selfish gains from the situation,” he said, according to an official text of his remarks.

Even as China has found common ground with Russia as both come under Western pressure, its economic future remains tied to American and European markets and technology. Leader Xi Jinping is pushing Chinese industry to become more self-sufficient, but Wang acknowledged that experience has shown “that China and the United States cannot decouple or sever supply chains.”

He said that China would strive to bring relations with the US back on course, saying they had plunged because “the United States has stubbornly continued to see China as its primary competitor and engage in blatant blockade, suppression and provocation against China.”