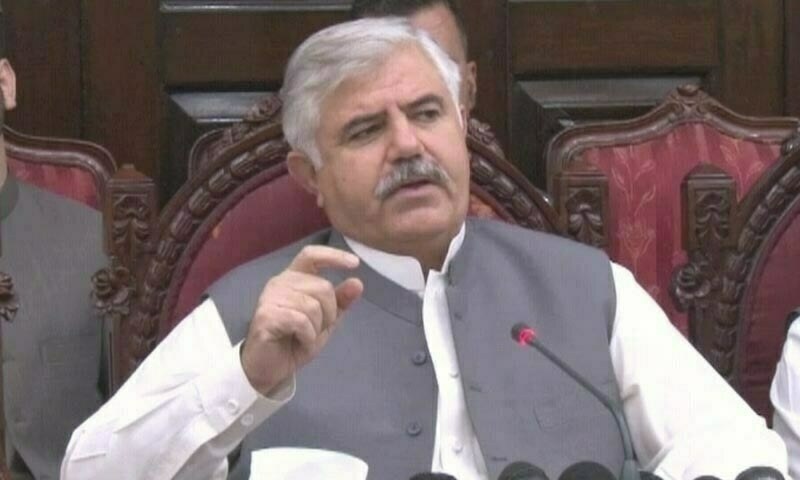 F.P. Report
PESHAWAR: Chief Minister Khyber Pakhtunkhwa Mahmood khan has reiterated his commitment not to compromise on law and order in the province and said that the incumbent provincial government is investing huge resources to cope with contemporary challenges.
Maintaining law & order is the first priority of his government and a number of initiatives have been completed to this effect during the last four years which have resulted in significant improvement in the overall policing in the province, he said, and added that additional allowances have been approved for the employees of the Counter Terrorism Department, whereas other required resources would also be provided on emergency basis.
He expressed these views while chairing a high level meeting regarding the law and order situation in the province. The forum reviewed the overall law and order situation and important decisions were taken to effectively counter prevailing challenges.
Provincial Minister Taimur Salim Jhagra, Advisor to Chief Minister for Home and Tribal affairs Babar Salim Swati, Special Assistant to Chief Minister on Information Barrister Muhammad Ali Saif, Chief Secretary Dr. Shahzad Bangash, IGP Moazzam Jah Ansari and other relevant officials attended the meeting.
The meeting was informed that Khyber Pakhtunkhwa Police and CTD are working under a well-devised and comprehensive strategy to maintain law and order in the province. It was disclosed on the occasion that substantial success has been achieved in thwarting the nefarious intentions of extremists, adding that 82 percent of the threats have been neutralized during 2022.
Addressing the participants, the Chief Minister said that peace is indispensable for the development and prosperity of the province. “Maintaining law and order has been the first priority of our government since day one”, he added.
The Chief Minister paid rich tribute to the police personnel for their sacrifices in the line of duty. He assured that the provincial government has extended all-out support to the police department and will continue to do it in future. However, the Chief Minister made it clear that maintaining peace and tranquility is our collective responsibility, for which all stakeholders would have to play their respective role in letter and spirit. He directed for heightened coordination amongst the relevant departments and agencies, adding that there should be close liaison among all relevant institutions in order to have an effective response mechanism.
He maintained that efforts for welfare and development can only yield results if there is peace in society. He made it clear that combating militancy and terrorist activities is the responsibility of the federation, because all the relevant institutions and agencies fall under the domain of the Federal Government. He regretted that the indifferent attitude of the incumbent Federal Government was a matter of serious concern which is causing multiple issues for the province.
Moreover, he said that the Federal Government wants to create financial instability and sabotage the peace and development process in the province by withholding the budgeted shares and other due rights of Khyber Pakhtunkhwa.