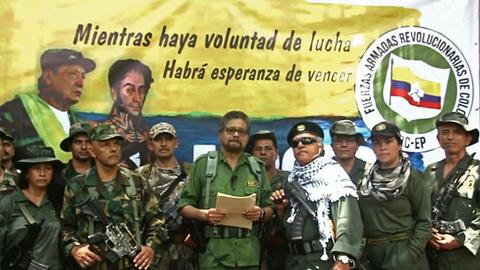 BOGOTA (AFP/APP): Colombia’s government has agreed to a six-month ceasefire with the five largest armed groups operating in the country, President Gustavo Petro announced on New Year’s Eve.
The truce was the main objective of Petro’s “total peace” policy, which aims to end the country’s armed conflict, which has persisted despite the dissolution of the Revolutionary Armed Forces of Colombia (FARC) in 2017. The armed groups still operating in Colombia, the world’s largest cocaine producer, are locked in deadly disputes over drug trafficking revenues and other illegal businesses, according to the Institute for Development and Peace Studies (Indepaz), an independent think tank.
“We have agreed to a bilateral ceasefire with the ELN, the Second Marquetalia, the Central General Staff, the AGC and the Self-Defense Forces of the Sierra Nevada from January 1 to June 30, 2023, extendable depending on progress in the negotiations,” Petro tweeted.
Despite the government’s efforts to negotiate with Colombia’s various armed groups, which include a combined total of more than 10,000 fighters, it has so far failed to contain the spiral of violence engulfing the country. Indepaz recorded nearly 100 massacres last year.
The National Liberation Army (ELN), the last recognized insurgency in the country, has been negotiating with the government since November. The Segunda Marquetalia and Estado Mayor Central groups — splinter factions of FARC which broke from the 2016 peace pact — have held separate talks with the government.
AGC, the country’s largest drug gang, is made up of the remnants of extreme right-wing paramilitaries that demobilized in the early 2000s.
The government is offering the groups “benevolent treatment from the judicial point of view” for the armed actors “in exchange for a surrender of assets, a dismantling of these organizations and the possibility that they stop exercising these illicit economies”, Senator Ivan Cepeda recently told AFP.
Some dissidents refused to lay down their arms alongside their FARC comrades six years ago, when the fearsome rebel army signed the deal with Bogota to end more than five decades of conflict.
Colombia has suffered more than 50 years of armed conflict between the state and various groups of left-wing guerrillas, right-wing paramilitaries and drug traffickers.
When he took power last August, Petro, the country’s first leftist president, vowed to negotiate with all Colombian armed groups as part of a “total peace” policy. There are currently around 90 political and criminal groups operating in the country, according to Indepaz.