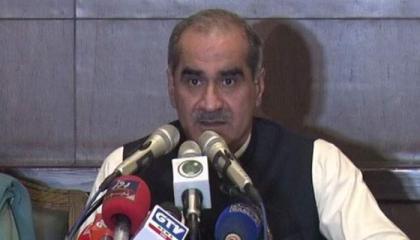 LAHORE (APP): Federal Minister for Railways Khawaja Saad Rafique said on Tuesday that the country needed stability in the current circumstances, and not elections. Talking to the media outside an accountability court here, he said that the Pakistan Tehreek-e-Insaf (PTI) was in power in two provinces besides Gilgat-Baltistan and Azad Kashmir and now the party should focus on welfare of the masses. But, instead of doing the welfare works for the masses, the PTI was demanding elections, he added.
He said that if elections started to be held on demand of a party then no assembly would complete its tenure. He questioned whether it was a play to make and break the assemblies, adding that billions of rupees were spent on the elections.
He said that elections should be held on time and Imran Khan should serve the masses in Punjab, Khyber Pakhtunkhwa, Gilgat-Baltistan and Azad Kashmir instead of plunder. He said that Usman Buzdar plundered in Punjab first and now the present provincial government was also indulged in it, adding that 1.5 billion rupees were being given to members of assembly despite the fact that the national kitty was empty and no donor was ready to give the loan.
He said that political opponents were crushed for success of ‘project Imran’. “Political opponents were made target of character assassination and defamation to present PTI chairman as a fake Mahatma”, he added. He said that during those days, everything looked alright to Imran Khan and now he had started crying whereas nothing had been done against him.
While criticising the PTI chairman for leveling allegations of corruption against the opponent political leaders, he said that Imran Khan should have proven the corruption. “Imran should have brought evidence of corruption in the courts as he remained the ruler for four years and all institutions were under him”, he added. He said that only lies were spread and a section of the media was also part of it.
Saad Rafique termed Imran Khan’s tenure as a dark era, adding that it had come to an end. He said that Imran Khan was alone today and now all his steps backfired, adding that the nation witnessed the landing of a long march in Nala Lai.
To a question, he said that the government was firefighting for the last eight months and dealing with the problems created by the PTI government, adding that the PTI government created a mess and every year billions of dollars had to be returned.
It was not an easy job as the country was on the edge of default, he said and added that the country was saved from default with tireless efforts of the PML-N led government. He said that the PTI destroyed the institutions.
To another question, he said that Parvez Elahi would not dissolve the Punjab Assembly at the direction of Imran Khan for the time being.
To another question, he said that the National Accountability Bureau should be abolished and a new institution for accountability should be established, which could not be influenced by anyone.