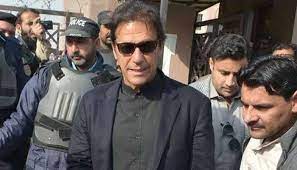 ISLAMABAD: A local court in Islamabad has extended the interim bail of PTI Chairman Imran Khan till January 31 in a case pertaining to the PTI protest outside the office of Election Commission of Pakistan.

Babar Awan appeared before the court. He submitted a petition seeking Imran Khan’s exemption from the court appearance which the judge accepted and extended the PTI chief’s bail till Jan 31.

However, the judge inquired of the lawyer whether his client would appear before the court on Jan 31.

On this, the judge adjourned the case till Jan 31.

At the outset of the hearing, lawyer Ali Bukhari requested the court to grant Imran Khan a permanent exemption from court appearance on medical grounds.

The lawyer said that he would ask his client to send his medical report on WhatsApp.

The judge, however, remarked ‘but Imran has not even filed a petition’.

The junior lawyer of the Election Commission of Pakistan pointed out that the application even did not bear the signature of Imran.

The judge asked Imran’s lawyer to submit at least power of attorney to the court in this regard.