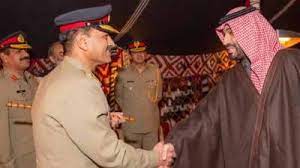 Both high ups discussed ways to develop bilateral relations in addition to issues of mutual interest, said state-run Saudi Press Agency (SPA). Saudi Defence Minister Khalid bin Salman, and other officials of the kingdom and Pakistan were also present in the meeting.

Last week, COAS Asim Munir arrived in Saudi Arabia on his first official visit to a foreign country since assuming the command of Pakistan armed forces. He has held a meeting with the Saudi defence minister wherein matters of mutual interests were discussed.

The kingdom’s minister in a tweet said, “We emphasized the strategic partnership between our brotherly countries, reviewed the bilateral military and defense relations, and discussed ways of strengthening our cooperation”.

After wrapping up his visit to Saudi Arabia, the COAS would head to the United Arab Emirates (UAE) to discuss bilateral security cooperation.

Meanwhile, the Inter-Services Public Relations said the army chief is on an official visit to Saudi Arabia and UAE from Jan 4 to Jan 10. COAS will be meeting the senior leadership of both brotherly countries to discuss matters of mutual interest military to military cooperation and bilateral relations focusing on security related subjects.