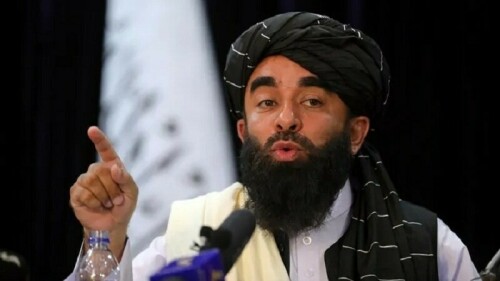 KABUL (Monitoring Desk): Afghan Taliban spokesperson Zabihullah Mujahid said on Thursday that a network of Daesh militants involved in the attack on Pakistan’s embassy in Kabul has been killed in an operation.

On December 2, the embassy in Kabul came under attack with Chargé d’Affaires (CdA) to Afghanistan Ubaidur Rehman Nizamani targeted. Nizamani was unscathed but his guard was critically wounded.

The banned Islamic State group’s Khorasan chapter (IS-K) had claimed responsibility for the attack, confirming that it was targeting the Pakistani envoy.

Subsequently, the Foreign Office had said that they remained in active contact with the Afghan authorities and expressed the confidence that the Dec 2 incident would be fully investigated and the perpetrators and their abettors would be brought to account.

In a statement issued today, Mujahid said Afghan security forces carried out operations in Kabul against a “dangerous network” of the Islamic State group or Daesh who were involved in attacks on the Pakistani embassy and on a hotel where Chinese nationals were staying.

On December 12, Beijing had said that five of its nationals were wounded in a bombing-and-shooting attack. China had later asked its nationals to leave Afghanistan over security concerns.

The Afghan government spokesperson confirmed today that the militants killed in the operation were also involved in a bomb attack near a military airfield in Kabul and several other areas.

He said that a similar operation was also conducted against Daesh in the Western Nimroz province.

Eight Daesh members were killed in the operations on Wednesday, he stated, adding that several foreigners were among those killed.

Mujahid went on to say that the killed terrorists had planned more attacks on key targets. “They planned to bring Daesh members from other countries and launch coordinated attacks.”

The spokesperson said the operation in Kabul was carried out in the Shuda-e-Saliheen and Qalacha areas as well as Zaranj, the capital of Nimroz. Three hideouts were “eliminated” during the operation.

Small arms, hand grenades, mines, suicide jackets and explosives were recovered from the hideout and seven Daesh members were arrested. Some other suspects were also taken into custody for questioning.

The operation in Kabul has once again raised concerns about the activities of Daesh in the capital city and other parts of the country. Taliban rulers usually downplay the threat of Daesh in Afghanistan despite international reports about the growing activities of the group.

The Foreign Office, in a statement released last month, had confirmed that the target of the attack was Nizamani, who remained unhurt.

The FO had “strongly condemned” the attack, but added the embassy would continue to function normally and there were no plans to withdraw diplomats from Kabul. The Afghan chargé d’affaires was also summoned to the foreign ministry to formally protest over the attack.

According to an official, Nizamani was walking in the Pakistan mission’s lawn in Kabul’s Kart-i-Parwan neighbourhood when terrorists shot at him.

The shots hit a security guard, identified as Sepoy Israr Mohammad, who was “critically injured” while attempting to save Nizamani, according to the FO.

Mohammad, who was hit by two bullets, was shifted to a hospital and later moved to Peshawar via helicopter.

Nizamani had been in Kabul for less than a month since he took over the charge as head of mission, replacing former ambassador Mansoor Ahmed Khan on November 4.