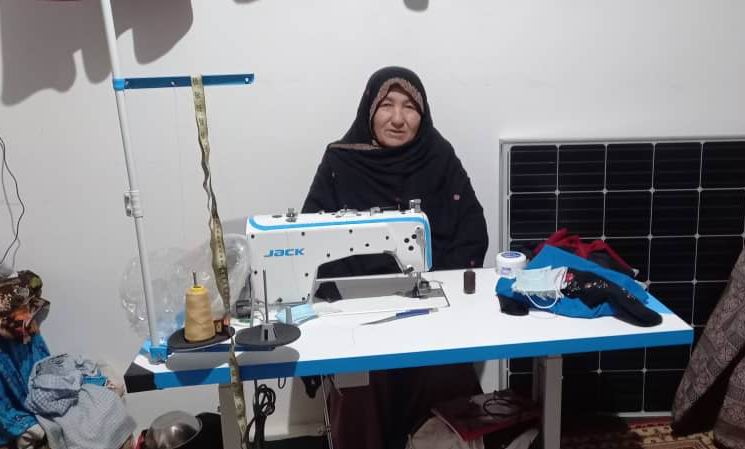 NEILI CITY (Pajhwok): In a cold corner of Neili, an elderly woman is busy spinning strings inside her shop to eke out a living for her family.
The bitter experiences of past conflict have forced the woman to toil and sweat to supporting a six-member family.
Benazir Hussaini told Pajhwok Afghan News; she lost her son to war five years ago. She has since been feeling like living in hell, the woman says. Since her son’s death, she has been hoping for peace, believing no other mother would mourn the loss of her child.
“Since my son was martyred, I’ve been slipping into poverty, misery and loneliness. I am the breadwinner for my family and live in a rental house. This is the bitter story of my life,” she commented.
Her husband passed away 18 years ago, leaving her with the onerous responsibility for raising children and feeding them through handcraft sales, the woman recalled.
She lost her son when he was about to shoulder responsibility for supporting the entire family, Hussaini added.
“The war has made life miserable for all. If there had been no conflict, I would have been living with my son and I wouldn’t have been spinning strings in in this biting cold.”
The war in Afghanistan has left Hussaini working from dawn to dusk for her children on the one hand and sharing sorrows of her others’ sons on the other.
“I have been working hard to provide my children with stationery and books and send them to school. I don’t let them feel the need for anything,” she continued.
Being a war victim, she has not yet received any assistance from the authorities. She complains of leading have a hard life and meeting needs of her family through making handcrafts.
The war has affected most of Afghan mothers. After learning of her son’s death, Hussaini’s life plunged into sorrows. Her pain has refused to go away.
However, Hussaini is happy over the war in her homeland coming to an end. She hopes mothers will no longer be anguished by their children’s deaths.
While yearning for peace all her entire life, she had suffered a lot during the prolonged war, she said.
She wants all people to honestly work together for peace and an equitable settlement in the country.
She hoped like the strings going through the sewing machine in an organised way, the Afghans would also see harmony and prosperity if peace returned to their country.