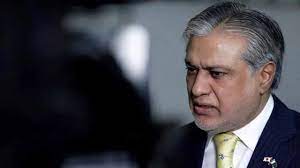 Ishaq Dar on Monday said export industry was one of highest priorities of the government.

He further said five zero-rated export-oriented sectors and all other exporters will be given complete facilitation for import of raw material, parts and accessories to meet their export requirements.

Export Industry is one of Highest Priority of our Govt. Five (previously) Zero Rated Export Oriented Sectors & all other Exporters will be given complete facilitation for import of Raw Material, Parts and Accessories to meet their Export requirements.

The finance minister’s tweet came among desperate efforts by import-based sectors to seek help from other sources than the government.
One such example was of All Pakistan Textile Mills Association (APTMA) Patron-in-Chief Gohar Ejaz who had written a letter to the American ambassador in Islamabad requesting him to arrange loan of two billion dollars for Pakistan to import cotton from the US.
Gohar Ejaz also urged the US government to announce concessional loans for Pakistan’s textile industry.

Moreover, the US government should devise a strategy to provide easy credit for importing cotton from the US since the textile industry in Pakistan is facing a shortage of 10 million cotton bales this year due to country’s economic slowdown, the letter says.

Gohar Ejaz also mentioned that letters of credit (LCs) of textile industry were not being opened for cotton import.

Pakistan had imported cotton from the United States last year for a total of $1.48 billion and orders for 1.2 million bales of cotton import from US have been booked so far this year, he added.

In addition, the Patron-In-Chief of the APTMA stated that 3.5 million cotton bales from the US might be imported with a two-billion-dollar loan. (INP)