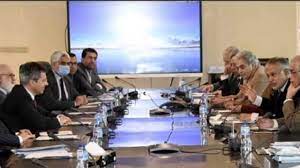 ISLAMABAD: Federal Minister for Finance and Revenue Senator Mohammad Ishaq Dar on Tuesday said that the United Arab Emirates (UAE) was one of the major economic partners of Pakistan.

“Pakistan attaches great value to brotherly relations with the UAE,” the minister added.

These views were expressed by the minister while meeting with a delegation of Etisalat International led by Mikhail Gerchuk, Chief Executive Officer (CEO) CEO e & International.

Minister of State for Finance and Revenue Ayesha Ghous Pasha, SAPM on Finance Tariq Bajwa, SAPM on Revenue Tariq Mehmood Pasha, the secretary Finance, the secretary IT & Telecom, and senior officers from the finance and privatization divisions attended the meeting.

Finance Minister Senator Ishaq Dar welcomed the delegation and highlighted the deep-rooted brotherly relations between Pakistan and the UAE.

Ishaq Dar recalled his meetings with Etisalat in Abu Dhabi and Dubai during his recent visit to the UAE and underscored the significance of resolving outstanding issues between Etisalat and the privatization commission and moving ahead for a mutually beneficial solution.

He also highlighted prospects of foreign investment in Pakistan, especially in IT and Telecom sector, which was growing rapidly, and said that the government was providing conducive environment and facilitation to attract foreign investment.

Mikhail Gerchuk, CEO e& International briefed the meeting on company’s profile and its future investments in Pakistan and expressed readiness to further invest in IT and Telecom sector of the country.

Both sides agreed to proceed ahead for the resolution of all outstanding issues between Etisalat and the privatization commission in a spirit of goodwill. (APP)