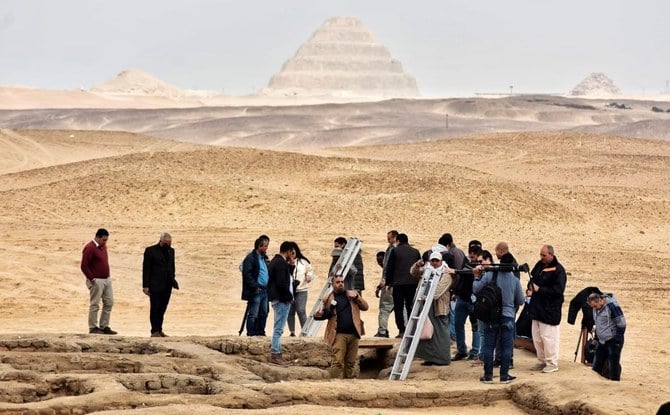 CAIRO: Twenty tombs dating back at least 2,500 years have been discovered at an archaeological site in Egypt.

Made of mud bricks and simple pits, the graves are thought to be from the late El-Sawy era between 664 and 525 B.C., most likely the 26th dynasty.

The find was made at Tell El-Deir in New Damietta, northern Egypt where the Egyptian archaeological mission affiliated to the Supreme Council of Antiquities has been conducting excavation work.

Mostafa Waziri, secretary-general of the Supreme Council of Antiquities, said the discovery added important new information on the history of the Damietta governorate.

Ayman Ashmawy, head of the council’s Egyptian antiquities sector, said the architectural design of the tombs and items of pottery found inside them, had provided a good indication of their age.

Qutb Fawzy, head of the Central Department of Antiquities of Lower Egypt and Sinai and the archaeological mission, said golden chips used to cover the bodies of those being buried had also been unearthed, along with a range of funerary amulets, and miniature models of vessels used for preserving body parts in the mummification process.

Director of the Damietta Antiquities District, Reda Saleh, said that the mission was continuing its work at the site in a bid to uncover the secrets of the Tell El-Deir necropolis, adding that its findings had already revealed many customs and burial methods of successive civilizations.

In 2019, archaeologists dug up seven gold coins from the Byzantine era and a group of ushabti statues engraved with the cartouche of Psamtik II, one of the kings of the 26th dynasty.

Ahmed Issa, Egypt’s minister of tourism and antiquities, said 250 archaeological missions from around the world were currently operating in Egypt, as well as 45 Egyptian digs.

He added that the country was looking to increase its visitor numbers to meet tourism targets.