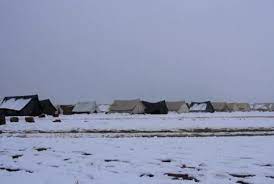 LOGAR (TOLOnews): A number of displaced families in Khoshi district in Logar province said their problems have increased with the arrival of winter and recent snowfalls.
They said they live under tents and have not received any aid this winter.
“We are faced with many difficulties here… We left our homes and everything to save ourselves,” said Hasibullah, a displaced family member.
“The night was so cold, and we heated our feet with boiling water,” said Zahra, member of a displaced family. “One a wolf came nearby and my children were screaming. I asked them to keep calm and they will not get hurt,” said Sabrina, a displaced person.
Zainab and her husband live in a tent with their five children.
She said their home was destroyed in summer floods and now they are faced with economic challenges but have not received assistance.
“No one helps us. We urge the international community to help us and allow women to work so that they will help us,” said Zainab.
“We don’t have anything in our home. Everything was destroyed by floods,” said Bibi Aisha, a displaced person. Most of the displaced people complained about a lack of humanitarian assistance to them.
“We spent the night in hunger in this tent and we don’t have food, water and even electricity,” said Rajab Ali, a displaced.
“When I look at these shelters, I cannot imagine how somebody lives here with no clothes, water and food,” said Sayed Ahmad Silab, head of the Silab Charity Foundation.
There is another camp in the Khoshi district that has housed at least 100 families.
“The people’s demand is that the problem of tents should be addressed and the distribution of land should be implemented so that people can find shelter,” said Sayed Daud Mirzazai, a representative of the displaced people in Khoshi.
Devastating floods last summer displaced at least 700 families in Logar.
Local officials assured that efforts are underway to address the problems faced by displaced families. “The current government has a major responsibility, and we continue to talk with the central government to make shelter (for the families),” said Rahmatullah, the district governor of Khoshi.