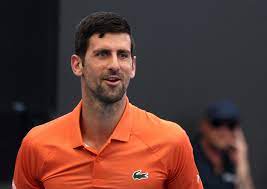 LONDON (Agencies): Novak Djokovic is set to miss Indian Wells and the Miami Open after the United States extended its requirement for international visitors to be vaccinated against Covid-19.

Proof of vaccination will be required to enter the country until at least 10 April but Serbia’s Djokovic has previously said he is unvaccinated.

Indian Wells and the Miami Open – two of the most prestigious tournaments on the tennis calendar outside the Grand Slams – start on 6 and 20 March respectively.

Former world number one Djokovic, 35, is currently in Australia – 12 months after he was deported from the country before the Australian Open because of his vaccination status.

Australia dropped its vaccine requirements in July and Djokovic’s three-year visa ban was overturned in November.
He is through to the second round of the Adelaide International as he continues his build-up to the Australian Open, the first major of the season, which starts on 16 January.

Djokovic is a nine-time champion in Melbourne and is just one Grand Slam title shy of Rafael Nadal’s men’s record of 22.

Speaking about his 2022 experience in Australia, in which he was detained and forced to stay at an immigration hotel, he said: “You can’t forget those events. It’s one of these things that sticks with you, it stays with you for I guess the rest of your life.
“It was something that I’ve never experienced before, and hopefully never again.”