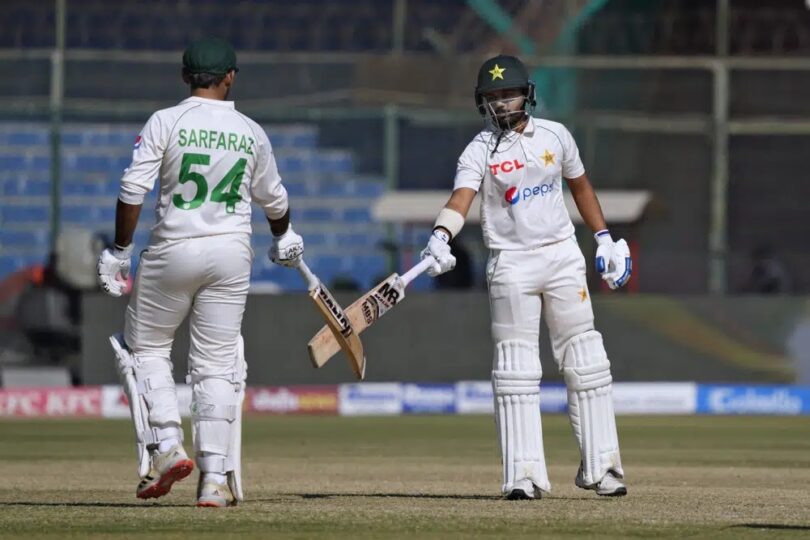 KARACHI: Saud Shakeel registered his first Test century in fifth appearance but Pakistan threw away his labourious innings by losing four late wickets for 12 runs on the third day of the second Test against New Zealand at the National Bank Cricket Arena on Wednesday.

Pakistan were on course for closing out the day in a comfortable position when they reached 385 for five. But as it has been a few times this season, they dramatically lost four wickets for 12 runs in 26 balls to end the day at 407 for nine, while replying to New Zealand’s 449. The home side still trails the visitors by 42 runs in the first innings.

Resuming at the overnight score of 13 in Pakistan’s 154 for three, the 27-year-old local lad finished the day at 124 not out. He has been batting for over eight hours, during which he has received 336 balls and struck 17 fours.

The former Pakistan Shaheens captain reached his half-century from 173 balls, while he took 67 balls to score the next 50 runs to reach the magical figures for the first time in his ninth innings and that too at his home ground. The left-hander’s only blemish was when at the score of 102, he played a loose shot but got away with it when Tom Latham dropped a simple catch at point off Tim Southee.

While Saud went on to complete a memorable century, his overnight partner Imam-ul-Haq could only add nine to his last evening’s score before being caught at the wicket off Tim Southee for 83. Imam and Saud put on 83 runs for the fourth wicket in 215 balls.

Following Imam’s departure, Saud found a reliable ally in Sarfaraz Ahmed as the two batters put on 150 runs for the fifth wicket in 238 balls. Sarfaraz, who scored 86 and 53 in the previous Test – his first since January 2019 – was unfortunate to be declared stumped off Daryl Mitchell after scoring an attractive 78 off 109 balls with 10 elegant fours.

Saud then put on 53 runs for the sixth wicket with Salman Ali Agha. The partnership ended when Michael Bracewell took a brilliant reflex action catch in the slip off Ajaz Patel, who later accounted for Hasan Ali (four). Ish Sodhi then dismissed Naseem Shah (four) and Mir Hamza on successive deliveries as Pakistan slipped to 385 for five to 397 for nine.

Patel finished the day at three for 88, while Sodhi scooped two for 94. Southee, Matt Henry and Mitchell picked up a wicket each.
Scores in brief: