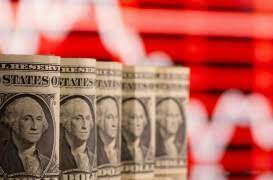 WASHINGTON/LONDON (Reuters): The dollar slipped on Thursday after rising in the previous session, with investors on edge at the end of the year as initial optimism over China’s reopening fizzled out.

Investors are weighing the impact of China’s rapid loosening of its strict COVID-19 rules with a surge in new infections.
Following China’s removal of its quarantine rule for inbound travelers from Jan. 8, the United States, Japan, India and other countries said they would require COVID tests for travelers from China.

“China is one of the keys I think to 2023 and what happens to the global economy,” said Chris Gaffney, president of world markets at TIAA Bank.

“If they can bounce back from the dramatic slowdowns that we’ve seen, that helps the overall growth on the global scale, but on the other hand, it could also lead to higher energy demand and more demand means higher prices,” he said.

“Many countries adopting an additional layer of testing for travelers arriving from China reflect hobbled resumption of travel amid China’s outbreak,” Vishnu Varathan, head of economics and strategy at Mizuho Bank, said.