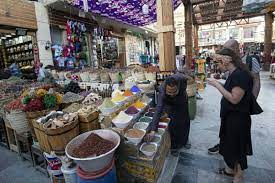 CAIRON (AFP): Public anger has been growing for months in Egypt over a severe dollar crunch and soaring food prices. But for many a money-saving tip from a state body has been the last straw.

As families have struggled to purchase household staples, an Egyptian government agency praised an alternative, cheap protein source — “chicken feet, good for the body and the budget”.

The advice drew widespread scorn on social media while lawmaker Karim al-Sadat slammed it as “divorced from the reality of the crisis”.

The anger reflects the hardships of many in the Arab world’s most populous nation, which recently had to ask for a $3 billion loan programme from the International Monetary Fund.

“The bread I used to buy for one Egyptian pound now costs three,” said Rehab, 34, at a Cairo bakery, asking not to be named in full.

In a country heavily reliant on food imports, prices have also shot up for staples such as cooking oil and legumes, putting the financial squeeze on many of Egypt’s 104 million people.

Rationing signs in big supermarkets now warn customers they can each purchase only three bags of rice, two bottles of milk and one bottle of oil.

Reda, a 55-year-old civil servant and hospital janitor who provides for her family of 13, said frozen meat had more than doubled in price and is “no longer an option”.

“Even with two salaries, there’s a lot I just can’t buy anymore.”

Egypt’s economy was hit hard after Russia’s invasion of Ukraine last February unsettled global investors and led them to pull billions out of the North African country.

The central bank twice devalued the pound last year as the foreign currency crunch saw imported goods worth billions held up at its ports.

Amid the crisis, President Abdel Fattah al-Sisi’s government has been looking for foreign currency where it can.

Starting this month, tourists will have to pay for train tickets in dollars, said Transport Minister Kamel al-Wazir.

Even the pro-government TV talk show host Amr Adib voiced fury when he urged banks to allow Egyptians abroad to at least “withdraw enough money to take a taxi to the airport so they can come home”.

Egypt has in the past decade tripled its foreign debt to $157 billion. It has $33.5 billion in foreign reserves, of which $28 billion are deposits from its wealthy Gulf allies.

Ratings agency Moody’s ranks Egypt as one of the five countries most at risk of defaulting on its foreign debt.

Egypt’s economy has long been dominated by powerful state and military-led enterprises.

“The Egyptian military, on whose support President Sisi is dependent, is the main beneficiary of the debt policy,” said Stephan Roll of the German Institute for International and Security Affairs.

External debt has helped “to finance major projects in which they could earn significant money, namely large development projects entrusted to military engineers,” he said.

As such, Roll said, Egypt’s foreign debt policy has served to “consolidate the authoritarian regime”.

Under IMF pressure, Egypt is now seeking to make headway on some long-delayed privatisation schemes.

A recent move to create a sovereign fund tied to the Suez Canal raised public fears that Egypt would lose sovereignty over the waterway, a major source of national pride.

Authorities were quick to reassure Egyptians that the canal is “not for sale,” while a fund overseen by Sisi himself aims to leverage the canal’s revenues to draw in foreign investment.

“When it comes to money, stay out of it,” Sisi said recently. “I know how to handle it.”