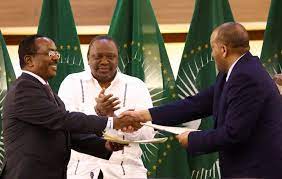 ADDIS ABABA (Reuters): A delegation from the Ethiopian federal government is on its way to the northern region of Tigray to oversee the implementation of last month’s peace agreement, the government communication service said on Monday.

This is the first high-level federal delegation that has travelled to Tigray in two years, the government said. Tagesse Chafo, the Speaker of the House of Representatives, is leading the delegation.

“This gesture is an attestation to the peace agreement getting on the right track and progressing,” the statement said. The federal government and Tigrayan forces signed an agreement to permanently cease hostilities on Nov. 2, after two years of fighting that killed thousands and displaced millions. A follow-up agreement on the disarmament of the Tigray People’s Liberation Front (TPLF) fighters, humanitarian access guarantees and entry of the Ethiopian military into the Tigrayan capital of Mekele was signed on Nov. 12.