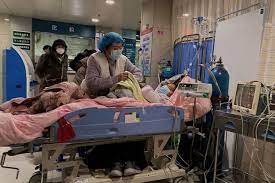 BRUSSELS (Reuters): The European Union should consider immediately scaling up genomic sequencing of COVID-19 infections and monitoring of waste water, including from airports, to detect any new variants given the virus surge in China, the bloc’s health chief said.

In a letter to health ministers of the EU’s 27 members, Stella Kyriakides said the bloc should be “very vigilant” as China lifted travel restrictions on Jan. 8 as reliable epidemiological and testing data for China were quite scarce.

Kyriakides advised ministers in the letter, to assess their current practices on genomic sequencing of the coronavirus “as an immediate step.”

If sequencing had been scaled down, countries might want to consider scaling it back up, she wrote, adding that it was important to continue or start surveillance of waste water, including sewage from key airports.

If a new variant appeared, the bloc needed to detect it early to be able to react quickly, the commissioner wrote.

The commissioner’s letter, dated Dec. 29, followed an online meeting of over 100 representatives from EU members, EU health agencies and the World Health Organization to discuss how to deal with the outbreak in China.

Health experts are expected to hold a crisis response meeting next week, according to an EU source.

Italy has urged the rest of the European Union to follow its lead and test travelers from China, but most EU members have said they saw no need to do so. Kyriakides said some EU members had proposed measures such as the random testing of travelers.

Spain said on Friday it would join other countries setting new restrictions by requiring travelers from China to test negative or show they have been fully vaccinated.

The European Center for Disease Prevention and Control says it does not currently recommend measures on travelers from China.

It said the variants circulating in China were already in the European Union, EU citizens had relatively high vaccination levels and the potential imported infections were low compared to the number of daily infections in the EU, with health care systems currently coping.