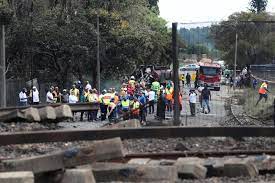 JOHANNESBURG (AFP): The death toll from a fuel tanker explosion in a South African city east of Johannesburg last week has climbed to 34, the health ministry said on Friday.

“The death toll from (the) Boksburg explosion incident has risen to 34,” the ministry said on Friday, after 24 people died over the following days of severe burns or other wounds.

Among the victims were people who had approached to see the truck stuck under the bridge before being caught in the blast, as well as “11 health workers” at the nearby Tambo Memorial Hospital, it said.

Dozens at the hospital, including patients and staff members, sustained serious burns after the explosion blew out its windows and caused the roof to collapse.

Videos on social media showed a huge fireball under the bridge, which the tanker appeared to have been too high to go under.

It was carrying 60,000 liters of LPG, which is used especially in cooking and gas stoves.