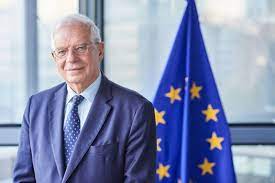 BRUSSELS: The EU High Representative for Foreign Affairs and Security Policy/Vice-president of the European Commission, Josep Borrell, will travel to South Africa and Botswana from 26 to 29 January

On Thursday 26 January, High Representative will be in South Africa. In the afternoon, HR/VP Borrell will participate in EU-South Africa bilateral consultations, ahead of the Ministerial Political Dialogue.

On Friday 27 January, High Representative/Vice-President Josep Borrell will co-chair, together with the Minister of International Relations and Cooperation of South Africa, Dr Naledi Pandor, the 15th South Africa-European Union Ministerial Political Dialogue, which will take place in Pretoria. Opening remarks will be broadcast on EbS. Commissioner for Financial Services, Financial Stability and Capital Markets Union, Mairead McGuinness, Commissioner for Health and Food Safety, Stella Kyriakides, and Commissioner for International Partnerships, Jutta Urpilainen, will also participate in the Ministerial Political Dialogue, alongside their South African counterparts.

The Ministerial Political Dialogue will be an opportunity to take stock of EU – South Africa overall cooperation and to prepare the way for the EU – South Africa Summit. Ministers will discuss next steps to further strengthen the South Africa-European Union strategic partnership at a time when the relation between the two has grown in depth and ambition despite the challenging international context. Ministers will review the strategic partnership focusing on various areas of mutual interest, including peace and security, multilateral cooperation, bilateral trade and investment, vaccine production and health, climate change, renewable energy, the just energy transition, science, innovation and education.

Following the meeting, HR/VP Borrell will give a joint press statement with Minister Pandor at 11:00 CET +/-, which will be broadcast on EbS. In the afternoon, HR/VP Borrell will take part in the launch of the Team Europe programme on ‘A Just and Green Recovery for South Africa’.

On Saturday 28 January, High Representative Borrell will travel to Botswana, where he will hold a number of bilateral meetings, including with Lemogang Kwape, Minister of Foreign Affairs, as well as with Elias Magosi, Executive Secretary of the Southern African Development Community (SADC). Whilst in Botswana, HR/VP will also visit the EU funded Corridor Trip Monitoring System (CTMS) to facilitate cross-border transit. The visit will serve to strengthen the already positive EU-Botswana relationship, which is increasingly focussed on advancing green and digital transformation, as well as sustainable development and boosting EU investment in Botswana. A visit to a diamond factory is also planned.

On Sunday 29 January, HR/VP will be in Johannesburg, South Africa, where he will visit an EU-funded project on service delivery in informal settlements, including a community approach to xenophobia. In the afternoon, he will visit the Apartheid Museum.