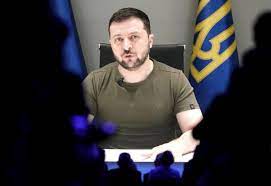 KYIV (Reuters): Ukraine’s President Volodymyr Zelenskiy has been vigorously promoting his 10-point peace plan, discussing it with US President Joe Biden among others, and urging world leaders to hold a Global Peace Summit based on it.

Here is an explainer on the plan and world reaction:

WHAT IS ZELENSKIY’S 10-POINT PEACE PLAN?

Zelenskiy first announced his peace formula at a November summit of the Group of 20 major economies.

The plan calls for:

In December, Zelenskiy urged the leaders of the Group of Seven nations to support his Global Peace Summit idea in winter that would focus on the peace plan “as a whole or some specific points in particular”.

WHAT HAS BEEN THE WORLD’S RESPONSE?

Russia rejected Zelenskiy’s peace proposal this month and Moscow reiterated on Tuesday that it would not give up any territory it has taken by force, around a fifth of Ukraine, which it says it has annexed.

Zelenskiy has been on a diplomatic flurry presenting his plan to leaders including Biden, French President Emmanuel Macron and India’s Prime Minister Narendra Modi, whose country has assumed the G20 presidency.

The Western world’s support for Ukraine’s military has run into billions of dollars, led by Washington, and nations have rushed to help Kyiv with demining and fixing power infrastructure.

But response to Zelenskiy’s peace plan and his proposed peace summit has been more cautious.

During Zelenskiy’s visit to Washington on Dec. 22, Biden said in public remarks only that he and Zelenskiy “share the exact same vision” for peace and that the United States is committed to ensure that Ukraine can defend itself.

The G7 leaders said they were committed to bringing peace to Ukraine “in line with its rights enshrined in the UN Charter.”

UN Secretary-General Antonio Guterres said that chances for any peace talks are small any time soon.

“I do believe that the military confrontation will go on, and I think we’ll have still to wait for a moment in which serious negotiations for peace will be possible,” he said in late December.