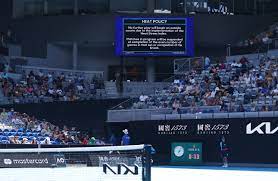 MELBOURNE (AFP): Extreme heat forced play to be halted Tuesday on outside courts at the Australian Open, with the roofs closed on its three main stadiums — Rod Laver Arena, Margaret Court Arena and John Cain Arena.

The lowest level reading is one and the highest five, at which point play is suspended.

“This means play continues until the end of an even number of games or the completion of a tie-break,” organisers tweeted.

“No new matches will be called to court. Play on outdoor practice courts is also suspended.”

Serbia’s Djokovic, one of the finest men’s tennis players of all time, was deported on the eve of last year’s Grand Slam at Melbourne Park because of his stance on Covid vaccines.

But the 35-year-old will be back when he faces Roberto Carballes Baena of Spain in his opener and looks likely to be given a warm reception by the Rod Laver Arena crowd.

He is bidding to win the Australian Open for a record-extending 10th time and in doing so tie defending champion Rafael Nadal’s men’s all-time record of 22 Grand Slam crowns.

Djokovic is hot favourite for the first Grand Slam of the year, but after winning an Adelaide warm-up tournament last week, he has been bothered by a slight hamstring injury.

He was pictured practising on Monday with heavy strapping around his left thigh.

“I always like my chances. I train as hard as really anybody out there,” Djokovic said ahead of his opener, attempting to dispel concerns about his hamstring.

“There’s a lot of youngsters now that are very hungry, that want to win. They want to take a scalp off you on the big stadium. I know that.

“But experience of being in these kind of particular circumstances helps I think to have the right approach and do things in a proper way.”

Former world number one and three-time Grand Slam champion Andy Murray will attempt to roll back the years.

There were no major shocks on the first day, with Nadal grinding down promising Briton Jack Draper in four sets to launch the defence of his crown.

Monday’s play began under cool overcast skies but the mercury rose during the day and is expected to hit a sweltering 36 Celsius (97 Fahrenheit) on Tuesday.

Women’s fifth seed Aryna Sabalenka of Belarus will open proceedings on the main Rod Laver Arena against Tereza Martincova of the Czech Republic.

Tunisia’s Jabeur, runner-up at Wimbledon and the US Open last year, starts her bid for a breakthrough maiden Grand Slam with a test against Slovenia’s Tamara Zidansek.

Other women’s seeds in action on Tuesday include France’s Caroline Garcia and in-form Olympic champion Belinda Bencic from Switzerland, who won the Adelaide warm-up tournament three days ago to get back into the world’s top 10.

Djokovic will wrap up the day’s play on Rod Laver Arena against the 75th-ranked Carballes Baena.