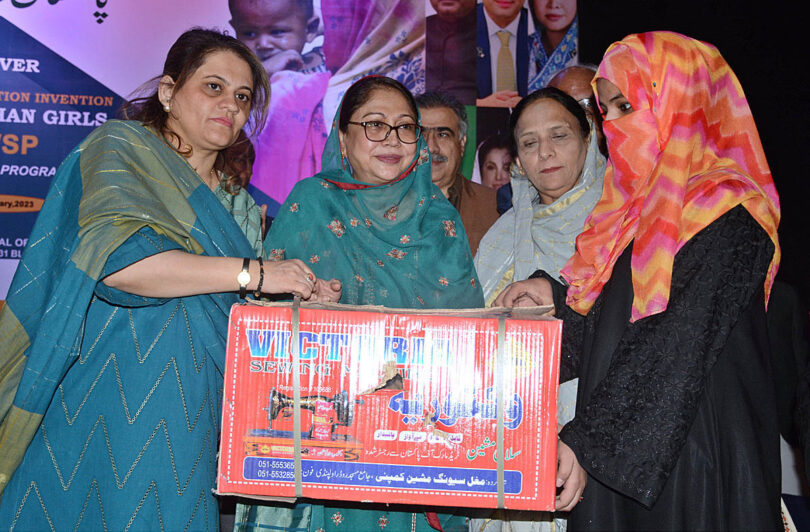 She was speaking as a Chief Guest at a Social Protection Convention, which was arranged by Pakistan Bait-ul-Mal (PBM) at Arts Council Karachi on Monday, where 100 families of orphan girls were distributed payments through a newly launched Orphans and Widows Supporting Program (OWSP).

Ms Faryal Talpur counted many firsts on women-led initiatives by the Pakistan Peoples Party from First Women Bank to Women Police Station to Lady Health Workers Program, which started during the first and second tenures of Shaheed Mohtarma Benazir Bhutto and were successfully continued and mainstreamed in Pakistan.

For this, she added that the most recent initiative on empowering the women economically by the Sindh Government was the handing over of 25 acres land to the landless women farmers (Hari’s) in Sindh.

“Only educated, skilled and economically stable women could stand equal and empowered”, she added.

She recalled another women empowerment initiative of ‘Women on Wheels’, launched from the same venue by her in Karachi that has become a national program and is most popular among young girls, as the drivers of future and their own fate. She said that another women centered and led initiative – Pink Taxis by Sindh Government is being launched soon in Karachi, which would travel to other parts of the province. She appreciated the role of Zamrud Khan for his proactive role on effectively running and managing an initiative of Sweet Homes at Islamabad and elsewhere in the country, adding that the media and concerned persons must visit the same facility at Shaheed Benazirabad in Sindh, where she has tried her best to support at the personal level.

Quoting the PPP Manifesto with a key agenda on equality for all, she said that Islam preaches and teaches equality, which is also enshrined in the Party’s founding document.

“PPP has always stood and fought for equality among all citizens and helped poor and the powerless”, she added. Ms Faryal Talpur also distributed Sewing Machines among widows by the Pakistan Bait-ul-Mal.

In his speech, Managing Director, Pakistan Bait-ul-Mal, Aamir Fida Paracha said that this particular program is launched for the widows to support their girls with an stipend of Rs 8,000 for one girl and Rs 12,000 for two girls to continue their education. He appreciated an all-out support by President Asif Ali Zardari for supporting the initiative of Sweet Homes at personal level, which is also wholeheartedly supported by Ms Faryal Talpur, adding that at his request President Zardari very recently sent them 1,000 shoes and uniforms for those orphans at the Sweet Homes. The event was also addressed by PPP Senator Waqar Mehdi, who said that no political party in Pakistan has done solid and commendable work for the women rights and empowerment in country as PPP did, since its formation till todate.

The Convention also was attended in a large number by the recipients of Pakistan Bait-ul-Mal women beneficiaries, their families and social protection and civil society activists.