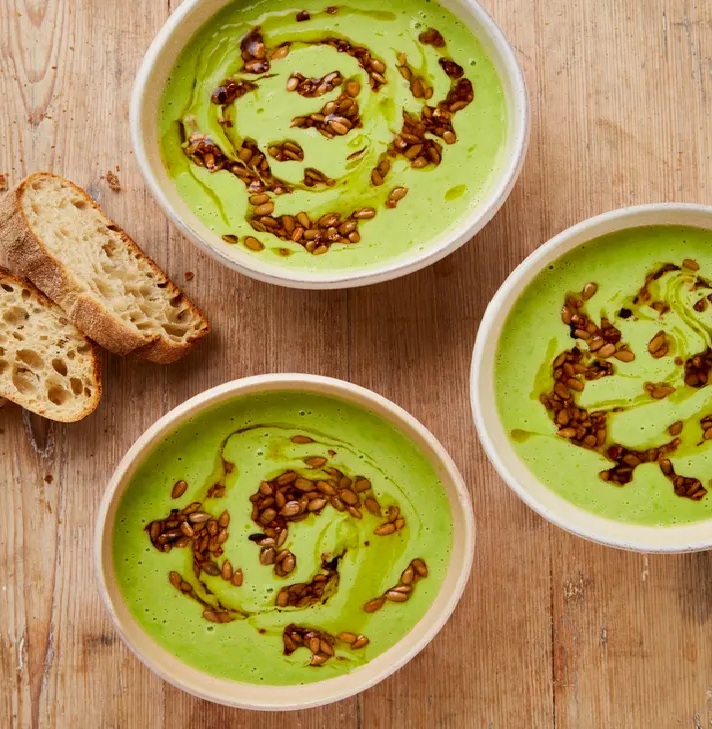 Truth be told, I’m not brilliant at either New Year’s resolutions or giving things up. If pushed to choose, however, I’d far sooner not eat meat for January than refuse the odd glass of wine, which at this time of the year is frankly medicinal.

And not eating meat or fish is the most brilliant way of having to ramp up flavour, colour and crunch: vibrant green peas, bright orange squash, palate-wakening aromatics, crunchy seeds and nuts, fresh herbs, chilli heat … The food we eat in January, and beyond, can be as much about dialling things up as it is about giving things up.

This is everything I want in the depths of winter, but it’s also one to earmark for summer, when it works just as well chilled. It’s delicious with a slice of toasted ciabatta or some cooked rice noodles.

Put a large saucepan on a medium-high heat, add the oil, celery, leeks, shallots, garlic and a half-teaspoon of salt, and cook, stirring frequently, for 10-12 minutes, until the vegetables are soft but not coloured.

Stir in the lime leaves, lemongrass and plenty of ground black pepper, and cook, stirring constantly to prevent the mix catching, for two minutes more. Stir in the coconut milk and 1.2 litres of water, bring to a boil, then turn down the heat to medium and leave to simmer gently for 20 minutes.

While the soup is simmering, make the soy seeds. Put the sunflower seeds, oil, ginger and chilli in a small saucepan on a medium high heat. When they start to sizzle, turn down the heat to medium and fry gently for five minutes, until the ginger and seeds turn golden. Tip out into a small ramekin or bowl and stir in the soy.

Put the peas in a large heatproof bowl or jug with half a teaspoon of salt. Remove and discard the lemongrass and lime leaves from the soup pot, then pour the soup over the peas. Working in two or three batches, blitz the soup in a blender for two or so minutes a batch, until smooth and pale green, then pour back into the saucepan and reheat if necessary.

To serve, divide the hot soup between four bowls and swirl in the seeds.

Make extra maple walnuts, if you like: they keep well in an airtight container and are lovely sprinkled over salads. Both the soup and the herb oil can be made a day ahead, ready to combine when serving.

Heat the oven to 220C (200C fan)/425F/gas 7. Put the whole pumpkin and sweet potatoes on a baking tray lined with greaseproof paper and roast, turning once halfway, for an hour, until soft and golden. Remove and turn down the oven to 180C (160C fan)/350F/gas 4. Once they’re cool enough to handle, use a metal spoon to peel off the pumpkin and sweet potato skins, and to scoop out the pumpkin seeds.

Meanwhile, put 80ml olive oil in a small saucepan on a medium heat, then add the sage leaves and fry for about two minutes, until deeply green. Use a slotted spoon to lift out the sage, transfer to a sheet of kitchen paper and leave to crisp up. Add the chilli to the hot oil, fry, stirring occasionally, for about two minutes, until deeply red, then transfer to the kitchen paper alongside the sage.

Transfer the hot oil to a large saucepan on a medium heat, add the leek, onion, ginger and three teaspoons of salt, and cook, stirring occasionally, for five minutes, until soft and translucent. Add the smoked paprika and ground coriander, cook for a minute, until fragrant, then add the cooked pumpkin and sweet potato flesh, and 1.6 litres of water.

Peel and grate the potatoes on to a chopping board, then add to the soup before they discolour. Bring the soup to a boil, then turn down the heat and simmer for 15 minutes.

While the soup is cooking, make the nut brittle. Line a small baking tray with greaseproof paper, top with the walnuts, maple syrup and a quarter-teaspoon of salt, and toss to coat. Roast, stirring once halfway, for about 10 minutes, until toasted and golden brown, then remove, sprinkle the fried sage and chilli on top, toss to combine and leave to cool. Once the nut mix is cool, scrunch up the paper to crush the brittle into smaller pieces.

Make the herb oil by combining the coriander, parsley, lemon zest, remaining 70ml oil and a quarter-teaspoon of salt in a small bowl.

Once the soup has cooked, take off the heat and blitz with a stick or regular blender until smooth and velvety. Add a splash more water to loosen, if need be, then divide between six bowls. Scatter the maple walnut brittle on top and serve drizzled with the herb oil.

This takes its inspiration from Moroccan harira, which usually features lamb or chicken. Feel free to add some, or use chicken stock instead of water for a richer (though clearly non-vegan) result.

Put the first six ingredients in a large saucepan with two teaspoons of salt and 45ml oil, then cook on a medium-high heat for five minutes, until the onions are translucent. Add the chickpeas and their liquid and 800ml water, bring to a boil, then add the swede and carrot. Lower the heat, simmer gently for 15 minutes, until the vegetables have softened but still retain their shape, then take off the heat and remove and discard the cinnamon stick.

While the soup is cooking, put the herbs, olives and vinegar in the small bowl of a food processor, add the remaining two tablespoons of olive oil and pulse to a rough paste.

To serve, divide the soup between shallow bowls and spoon the olive mixture on top.