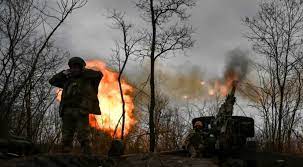 MOSCOW (Agencies): Russian forces struck the city of Kramatorsk in eastern Ukraine on Friday, the deputy head of Ukraine’s presidential administration said, after the supposed start of a unilateral Russian cease-fire.

“The occupiers hit the city with rockets twice,” Kyrylo Tymoshenko said on social media, adding that a residential building had been hit but there were no victims.

A unilateral Russian cease-fire ordered by President Vladimir Putin has come into force along the entire front as of noon Moscow time, Russian state television said.

“At noon today, the cease-fire regime came into force on the entire contact line,” Russia’s state First Channel said. “It will continue until the end of January 7.”

The impact of Russian President Vladimir Putin’s order for his forces in Ukraine to observe a unilateral, 36-hour cease-fire was in doubt Friday after Kyiv officials dismissed the move as a ploy but didn’t clarify whether Ukrainian troops would follow suit.

Moscow also didn’t say whether it would hit back if Ukraine kept fighting.

The Russian-declared truce in the nearly 11-month war was due to begin at noon Friday and continue through midnight Saturday Moscow time.

Putin’s announcement Thursday that the Kremlin’s troops would stop fighting along the 1100 Km front line or elsewhere was unexpected. It came after the Russian Orthodox Church head, Patriarch Kirill, proposed a cease-fire for this weekend’s Orthodox Christmas holiday. The Orthodox Church, which uses the Julian calendar, celebrates Christmas on Jan. 7.

Ukrainian President Volodymyr Zelensky questioned the Kremlin’s intentions, accusing the Kremlin of planning the fighting pause “to continue the war with renewed vigor.”

“Now they want to use Christmas as a cover to stop the advance of our guys in the (eastern) Donbas (region) for a while and bring equipment, ammunition and mobilized people closer to our positions,” Zelensky said late Thursday.

He did not, however, state outright that Kyiv would ignore Putin’s request.

US President Joe Biden echoed Zelensky’s wariness, saying it was “interesting” that Putin was ready to bomb hospitals, nurseries and churches on Christmas and New Year’s.

“I think (Putin) is trying to find some oxygen,” Biden said, without elaborating.

State Department spokesman Ned Price said Washington had “little faith in the intentions behind this announcement,” adding that Kremlin officials ”have given us no reason to take anything that they offer at face value.”

The truce order seems to be a ploy “to rest, refit, regroup, and ultimately re-attack,” he said.

The Institute for the Study of War agreed that the truce could be a ruse allowing Russia to regroup.

“Such a pause would disproportionately benefit Russian troops and begin to deprive Ukraine of the initiative,” the think tank said late Thursday. “Putin cannot reasonably expect Ukraine to meet the terms of this suddenly declared cease-fire and may have called for the cease-fire to frame Ukraine as unaccommodating and unwilling to take the necessary steps toward negotiations.”