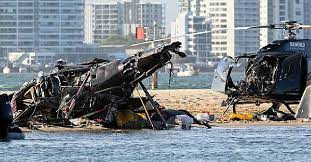 Emergency services were called to the scene near the Sea World theme park at about 2 p.m. local time, Gary Worrell, acting inspector at the Queensland police, told a news briefing.

Worrell said the two aircraft crash-landed after the collision. “As a result of that, four people have lost their lives today.”

The Australian Transport Safety Bureau said it had launched an investigation into the accident.