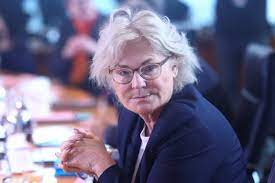 BERLIN (AFP): Filmed on the streets of Berlin amid chaotic New Year’s celebrations a video address from the German defense minister posted on social media drew criticism Monday for its tone-deaf message.

Barely audible above the sound of exploding fireworks, Christine Lambrecht reflected on a year ending with “war raging in the middle of Europe.”

The conflict in Ukraine had led to “a lot of special experiences” and the chance for “many encounters with great and interesting people,” Lambrecht said in the clip posted on her personal Instagram account.

Lambrecht’s New Year’s address failed to “hit the right tone” and made the war sound like an “exciting professional experience,” the Tagesspiegel daily wrote.

Lambrecht, a member of Chancellor Olaf Scholz’s Social Democrats, has faced strong criticism in the media for her response to the Russian invasion and Germany’s sluggish support for Ukraine.

The minister was mocked in January 2022 for her announcement that Germany would send 5,000 helmets to Kyiv, where the government was asking for heavy weapons to ward off Moscow.

At a regular press conference, a spokesman for the defense ministry declined to comment on the “private video” put out by Lambrecht. He would only say that “no official resources” were used in the production of the clip.

After two years during which fireworks were banned due to the coronavirus pandemic, revellers in Germany once again took to the streets to set off thousands of rockets and firecrackers.

The scenes in Berlin provided an uneasy backdrop for Lambrecht’s video at the same time as the Ukrainian capital was the target of Russian airstrikes.

This round of anarchic celebrations led to dozens of injuries and at least one death, with fireworks also aimed at emergency service workers across Germany.

The scale of the chaos left Interior Minister Nancy Faeser “stunned and angry.”

Anyone attacking the police or rescue workers “must be punished with the full severity of the law,” she said.