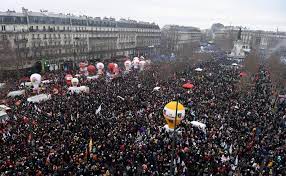 Furious French came to the streets and mass public strikes crippled much of France’s public transport on Thursday as protesters came out in force against a deeply unpopular pensions overhaul, with schools and media also heavily affected. France’s trade unions called for mass mobilization, and over a million demonstrators are likely to gather in multiple cities across France.

France is currently passing through a mass public uprising against the recently introduced pension forms plan put forth by the ruling Emmanuel Macron government about a week ago. Macron’s government has proposed an increase in the retirement age from 62 to 64. That will not only automatically increase the maturity term but also made it compulsory for elderly people to work two more years to get retirement benefits. Presently, more than 12 workers’ unions are staging demonstrations against the pension reforms bill while almost all salaried persons including school teachers, doctors, Metro staff, factory workers, and daily wagers are on the strike to fail government plans to further squeeze their present-day life as well as their dotage living.

Realistically, the world has witnessed unprecedented series of circumstances ranging from the COVID-19 pandemic, the war in Ukraine, the global energy crisis, skyrocketed inflation, and intensified global rivalry between major power blocs over the past years which not only changed the dynamics of the global economy but also prompted unimaginable economic problems and financial constraints for the nations around the globe. Ultimately, the repercussions of global events not only disrupted businesses, and politics across the universe but also undermined the civic, social, and daily life of the masses in all parts of the world. Most pro-public governments put curbs on their unessential spending, defense budgets, Ministers’ tours, and tourism while the dictatorial regimes and selfish rulers imposed new taxes, announced cuts on old-age benefits, and extended the retirement age of the masses to replenish their depleted coffers. After all, the bulk of levies, price hikes, and public spending have to be borne by the common man in most of the nations in the world.

France is a centuries-old democracy and French leaders had been vocal advocates of civil liberties, and human and public rights at home and abroad. However, earlier the French government jacked up the retirement age from 60 to 62 and now mulling to raise it for another two years, along with a significant reduction in the benefits for retirees. Interestingly, Mr. Emmanuel Macron termed his pension reforms fair and responsible legislation while hoping the protests would not turn into violence and derail public life. Meanwhile, the French Police had prepared themselves to tackle all possible situations, called back its reserve force, and took up rubber bullets, water cannons, tear-gas shells, and Police officers had been armed with protective shields and wooden sticks to efficiently use those gear in their defense and assault the protestors.

The ongoing tussle between Russia and the Western bloc is on the rise that entirely bulldozed the global economy. Western nations are actively supporting Ukraine with billions of dollars, and modern weaponry to defeat their common enemy. Western leaders do not walk away from their political agenda and shamelessly busted the people’s livelihood and old age benefit to implement their monopoly in the world. After all, what else poor masses can do except decry and commotion?