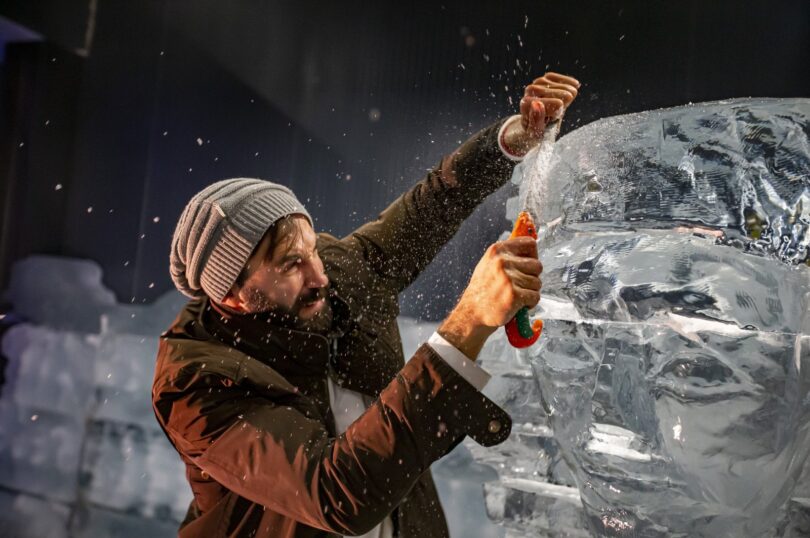 ERZURUM (AA): Türkiye’s eastern province of Erzurum, a preferred spot for winter tourism, hosted over 100,000 visitors as it opened the country’s first and only ice museum.

The Ata Ice Museum, the only establishment of its kind in Türkiye, was opened in cooperation with Atatürk University and the Northeast Anatolian Development Agency (KUDAKA). It opened in 2020 at the Faculty of Fine Arts at Atatürk University in Erzurum, one of the cities where the winter season is harsh.

Since its opening in 2020, the museum has hosted numerous solo exhibits and others under the themes “Republic and Child” and “Salt and Ice (Tuz Buz).” It displayed frozen works such as igloo homes and sculptures of Türkiye, its flag, a phoenix, the Trojan horse, Göbeklitepe and important symbols of Erzurum.

The museum, which contains ice sculptures illuminated with special lighting systems, takes visitors on a journey through the poles bundled up in coats due to the cold temperature inside.

Mustafa Bulat, dean of the Fine Arts Faculty of Ataturk University, told Anadolu Agency (AA) that the museum opened its doors to visitors on July 15, 2020.

Bulat said it also has works of art concerned with social issues on display.

“The theme in our museum constantly changes. In about three to five months, the ice works start to lose their shape, and we update our museum with new projects,” he explained.

Noting that many of the museum-goers came from schools, he added: “We can say that more than 100,000 visitors came to our museum.”

As it gains international recognition, particularly via social media promotions, museum administrators plan to apply for the European Museum Award, making it a well-known brand.

Bulat stressed that they plan to organize an event in February with the participation of around 10 foreign artists by working with a private company.

The museum is constantly active, with students in sculpture departments taking elective ice sculptures courses in the museum, he noted.

He noted that the museum owns eight machines that make blocs of transparent ice to be used for sculptures to be displayed in the two-floor exhibition area of 400 square meters (about 4,300 square feet) and displayed for visitors.

He said the museum is also home to the ice sculptures of important locations in Anatolia. “For example, there is a project from Şanlıurfa’s Göbeklitepe, which is described as the ‘zero point in time’ dating back 12,000 years and a site on the UNESCO World Heritage List.”

As the museum is home to 250-300 ice works, Bulat said they were always ready to host local and foreign visitors.