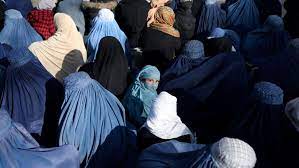 KABUL (Khaama Press): With the latest set of gender-based restrictions on women’s access to education and employment, the Taliban administration has put in place a ‘Gender Apartheid’ in Afghanistan.
Afghanistan’s interim regime has started exercising ender apartheid in Afghanistan following the enforcement of a ban on women’s education and work in government and non-government organizations, prompting condemnations from the international community.
The latest move has sparked protests in different corners of Afghanistan as female university students and women activists took to the streets chanting for equal rights to education over the past couple of days.
Foreign governments including the US, UK, Germany, Norway, Pakistan, Saudi Arabia, and Iran have criticized the earlier ban on the university education of women in Afghanistan. Meanwhile, global organizations such as the UN, UNAMA, Amnesty International, European Union, and Islamic Unions described the act as extremely disappointing and called on the Taliban administration to lift gender-based restrictions and allow Afghan women and girls to return to public life.
Taliban’s administration has accused female university students of not complying with the Islamic Hijab, mingling with male students, and not following the regulations established by the ruling regime.
“Women in Afghanistan are suffering gender apartheid. The Taliban have imposed a system whose aim is to expel women from public spaces. It has been 431 days since girls are not allowed to attend school. More could be done. The EU must support the establishment of an independent mechanism for accountability and support ICC investigation. The EU has to step up its support for Afghan women’s and human rights, as well as for women in exile, by providing quality educational and employment opportunities” MEP Soraya Rodríguez Ramos, Renew Europe Group’s Coordinator in the Committee on Women’s Rights and Gender Equality, said.
Considering the dire economic situation and the harsh winter hitting ordinary people so hard, the gender-based restrictions imposed by Afghanistan’s ruling regime is not appropriate at all. Doing so will affect the continuous flow of humanitarian aid into the country and paves the way for further isolation of the country during these difficult times.