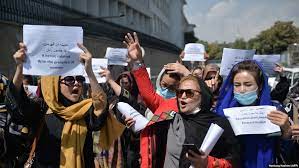 KABUL (TOLOnews): The Ministry of Economy in a statement ordered all national and international non-government organizations to suspend their female staff members until the next announcement.
The announcement of the Islamic Emirate faced widespread reactions at national and international levels.
US Secretary of State Antony Blinken in a tweet expressed deep concerns about the Islamic Emirate decision’s ban on women’s jobs and said “this decision could be devastating for the Afghan people, women are central to humanitarian operations around the world.”
US Special Representative for Afghanistan Thomas West said the Islamic Emirate has forgotten its real responsibilities to its people.
“The Taliban’s decree barring women from working to deliver humanitarian aid is profoundly irresponsible. It poses mortal risks to millions who depend on life-saving assistance,” West said.
“The Secretary-General is deeply disturbed by the reported order of the de facto Taliban authorities banning women from working for national and international non-governmental organizations,” United Nations said in a statement.
This comes as the suspension of higher education for female students was announced late Tuesday by the Ministry of Higher Education, a decision that sparked widespread reactions at national and international levels.
“Women no longer allowed to work for NGOs; another outrageous act against women, including all those that depend on them through fundamental and self-sacrificing NGO work. The ones who suffer are, once again, the helpers and their beneficiaries, i.e., the weakest and most in need,” said Germany’s embassy for Afghanistan.
Norway’s Foreign Minister Anniken Huitfeld “strongly condemned” the decision and called for its immediate reversal.
“I strongly condemn the ban on female employees of NGOs in Afghanistan. This decision must be reversed immediately. Norway will review the situation with its partners and issue an appropriate response,” she said.
“We condemn the Taliban’s decision to ban women from working for NGOs and international organizations. It goes against humanitarian principles, further marginalizes women and girls, and impacts the poorest Afghans. We call on the Taliban to reverse this decision,” Australia’s embassy for Afghanistan.