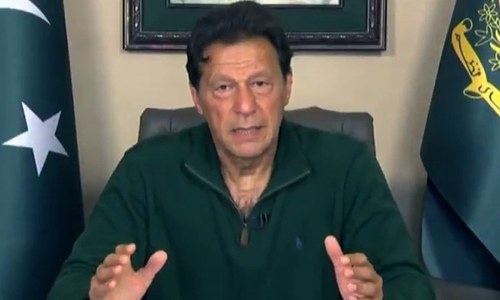 KARACHI (PPI): Pakistan Tehreek-e-Insaf (PTI) Chairman Imran Khan Tuesday said the incumbent government has been issuing irresponsible statements against Afghanistan.
Addressing a seminar on soaring terrorism in Pakistan through a video link, the former Prime Minister said a pro-Pakistani government is in Kabul and we should not spoil the relations with it, he added. Terrorism is the core problem in Pakistan adding that the country has participated in USA’s war against terrorism for 20 years. He said cooperation with the neighbouring nations was important. He also stressed that the government should focus on friendly relations with Afghanistan. “The ministers were issuing irresponsible statements that they were planning to attack Afghanistan.
Imran Khan said that when the US left Afghanistan it was a golden opportunity for Pakistan and the PTI-led government tried its best to be friends with the neighbouring country adding, “We didn’t interfere in the matters of Afghanistan and for the first time Afghani government favored Pakistan.”
“If the Afghan government stops cooperation with Pakistan, then we will have a never-ending war on our soil.” He said Pakistan repeatedly raised concerns over Kabul’s harbouring of Tehreek-e-Taliban Pakistan (TTP) militants and not implementing its promise of ensuring that its soil is not used for terrorism.
The PTI chief said the coalition government was not focusing on talks with its Afghan counterpart. Imran Khan said that the most destructing are the suicide attempts and even USA suffered the most as they didn’t have any solution to such attacks. “Pakistan suffered due to support to the USA and I was criticized over my statements against the support,” he added. “Not a single Pakistani was involved in 9/11 but the country suffered.” He said that he was of the opinion that the country should have remained neutral.
Taking a jibe at the government, he said the government has been begging in front of the world. “Pakistan’s economy never suffered this much in history.” PTI chief also opined that the country should avoid military operations maintaining that it has its own repercussions.