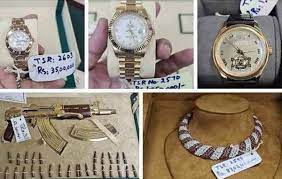 ISLAMABAD (INP): In a major development, PM Shehbaz Sharif-led federal government has decided to make details of gifts, received over the past two decades public. It was learnt that the decision to share details of Toshakhana gifts on the Cabinet Division’s website was taken in the federal cabinet meeting chaired by Prime Minister Shehbaz Sharif here.
The development comes four days after govt received backlash over expressing reservations to the disclosure of Toshakhana gifts. The concern was raised by the government in its report submitted before the single-judge bench during the hearing of a petition seeking to make records of Toshakhana gifts public.
The petition was filed by a private citizen Munir Ahmad through advocate Azhar Siddique in December 2022. As per the country’s law, any gift received from dignitaries of a foreign state must be put in the state depository or the Toshakhana. The Toshakhana controversy caught media attention after former prime minister and Pakistan Tehreek-e-Insaf (PTI) Chairman Imran Khan was accused of hiding details of the gifts he received during his tenure in the government.