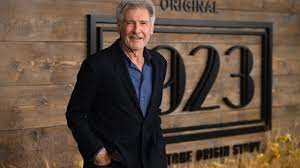 WASHINGTON (AFP): Harrison Ford has rarely bothered with television since “Star Wars” propelled him to A-list movie fame nearly half a century ago — but that is about to change with small-screen Western “1923.”

Spun off from “Yellowstone,” a modern-day cowboy saga that has become a rare cable TV ratings juggernaut in the United States, Ford’s prequel series traces the ancestors of the wealthy, ruthless Dutton clan and their sprawling Montana ranch.

“It’s a very complicated and ambitious — epic, even — undertaking, this story,” Ford told AFP at the Los Angeles premiere for the show, which will stream on Paramount+ from Sunday.

With the show shot largely on location in Montana, Ford joked that he was lured to “1923” by the prospect of “outdoor work.”

But Ford, who spent years working repetitive television jobs in Los Angeles before he was cast as Han Solo and Indiana Jones, is not the only Hollywood film giant to sign up for the TV series.

He and Oscar winner Helen Mirren co-star as Jacob and Cara Dutton, a long-married couple working to protect their land and cattle from bears, wolves and jealous neighboring ranchers. Former James Bond actor Timothy Dalton is cast as a villain.

Their presence in “1923” is part of a broader trend in the entertainment industry. Movie stars from Al Pacino to Meryl Streep have flocked to the small screen to be part of the so-called “golden age of television.”

The entry of deep-pocketed streaming giants Netflix, Amazon Prime and Apple TV+ has created a highly competitive and lucrative marketplace, forcing other networks to up their game.

“The writing can be found in movies and in television, and I just found some great writing in television. That’s what made me want to do it.”

Ford is still set to appear on the silver screen in next year’s “Indiana Jones and the Dial of Destiny” as well as several Marvel superhero films in a minor recurring role.

Of course, few recent series can boast the success of “Yellowstone.”

But “this particular Duttons saga has a different kind of character to the other two,” said Ford, about “1923.”

“Each of them has an individual character which I think is really interesting and powerful.”

For Mirren, “1923” is a “wonderful observation and essay on American history” that feels like “a sprawling Russian novel.”

Dalton said the truth about pioneers in the West has “not ever really been told honestly, has it?”

In the show, Ford is regularly seen riding a horse through the stunning mountains of Montana — just a few hours’ drive from the remote ranch in Wyoming that the actor has called home for decades.

During the first episode, his character is confronted by a sheep rancher who claims the size of Dutton’s enormous and closely guarded property is unfair, given that his neighbors are scrabbling to keep their flocks alive on the sparse surrounding lands.

The question of who owns America’s majestic West is a common theme across the “Yellowstone” shows, which portray Native Americans as well as ranchers.

It hits close to home for Ford, who moved from California to Wyoming seeking privacy in the 1980s, and is an active environmentalist who has donated hundreds of acres of his own land for conservation.

So, does “1923” have any lessons for solving America’s never-ending debate over its most precious resource?

“Well, there are perceptions, that are not mine, about the land,” said Ford.