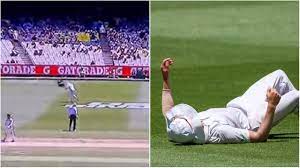 MELBOURNE: South Africa player Anrich Nortje was hit by a spidercam during his team’s second Test against Australia being played in Melbourne.

A spidercam hit Nortje as he walked to his fielding position between overs on the second day of the Test match. Spidercam usually hovers above the players, but it went a little too low this time.

Footage from the side-on camera and the spidercam revealed that Nortje was hit on his upper body at pace. At the same time, the spidercam received a sharp jolt on impact. The right-arm pacer was knocked to the ground but got back up immediately.

The incident happened soon after a wonderful display of fast bowling by Nortje in the post-lunch session. The speedster regularly clocked more than 150km/h during the four-over spell but was unlucky not to claim a wicket.

On Tuesday, on day two of his 100th Test, Australia opener David Warner retired after tea in cramped-up exhaustion but not before scoring a wonderful double century.