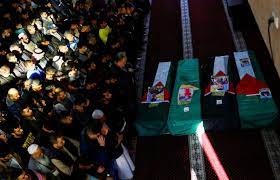 GAZA (Reuters): Months ago, Talal Al-Shaer bid his two sons safe travels as they set off from the Gaza Strip on a tortuous route that they prayed would bring them new lives in Europe, free of poverty and war.

But the boat taking them across the Mediterranean Sea from Libya sank soon after leaving. One son drowned, his body recovered. The other was lost.

Rather than regaling friends about their successful migration, Al-Shaer received condolences on Sunday.

“A whole generation is lost, suffering, blockade, scarce jobs, bad mental health. That is what pushes them to migrate,” he said ahead of the funeral for his son Mohammad, whose body was returned along with those of seven other Palestinians.

Three others, among them his son Maher, they remain missing.

The eight young Palestinian men who drowned off the coast of Tunisia nearly two months ago tried to sail to new lives in Europe.

Gaza’s 2.3 million people are no strangers to hardship, after decades of war with Israel, economic clampdowns aided by neighboring Egypt that starve the economy and splits between Palestinian factions. According to the World Bank, unemployment in Gaza runs at about 50 percent and more than half its population lives in poverty.

But among the thousands attending the migrants’ funerals, there was added outrage and despair at the October shipwreck.

While dangerous migrations to Europe have picked up pace in recent years from across the Middle East, Palestinians feel especially driven to hazard them — and vulnerable to smugglers.

“Human-trafficking gangs are behind these illegal migration trips and they exploit these youths, charging up to $10,000 per person,” Palestinian Foreign Ministry official Ahmad Al-Deek said. “These are death trips.”

He said the total number of Palestinian migrants was unknown. The young men who were buried on Sunday crossed Egypt before flying to Libya where they waited months to set sail. Deek said smugglers sometimes sank boats themselves if they felt threatened and deceived people about the risks.

Al-Shaer recalled sending off Mohammed with the words: “Go. May you find a better life – a dignified life.”