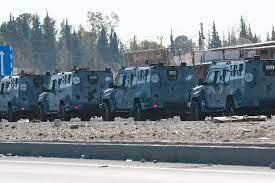 AMMAN (Reuters): Three Jordanian police personnel were killed in a raid on hideout of suspected killers of a policeman in the southern city of Maan, a police statement said on Monday.

The police said one of the suspects believed to be a militant was killed. The statement said investigations were ongoing on the incident.

The Public Security Directorate mourned the death of three officers and the wounding of five others during a raid this morning, a statement carried by Petra News Agency said.

Tensions have mounted in Maan and several cities in southern Jordan in particular after sporadic strikes by truck drivers protesting against high fuel prices.

Brigadier General Abdul Razzaq Dalabeh, the deputy police chief of Maan province and who was posthumously promoted by the Jordanian Cabinet, was shot in the head on Thursday as rioters clashed with security forces who had entered a neighborhood of the desert city of Maan to quell riots.

The government vowed to take tough steps and redeploy more anti-riot police against people who protest violently against a squeeze in living conditions.

Police said over forty security personnel were wounded in the clashes where protesters smashed cars, burnt tires and mounted roadblocks to close a highway in some of the most widespread civil unrest in recent years.