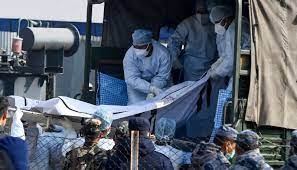 POKHARA (AFP): Nepali hospital staff began the grim task of handing over bodies to grieving families on Tuesday after a plane with 72 people on board crashed, the country’s worst aviation disaster in three decades.

The Yeti Airlines flight with 68 passengers and four crew plummeted into a steep gorge, smashed into pieces and burst into flames as it approached the central city of Pokhara on Sunday.

All those on board, who included six children as well as 15 foreigners, are believed to have died.

Rescuers have been working almost around the clock extracting human remains from the 300-meter deep gorge strewn with twisted plane seats and chunks of fuselage and wing.

Seventy bodies had been retrieved by early Tuesday, police official AK Chhetri told AFP. Another senior official told AFP on Monday the hope of finding anyone alive was “nil.”

“We retrieved one body last night. But it was three pieces. We are not sure whether it’s three bodies or one body. It will be confirmed only after DNA test,” he said.

“The search (for) the missing two other bodies has now resumed,” Chhetri said.

Drones were being used and the search had been expanded to a radius of two to three kilometers (one to two miles), he said.

Up to 10 bodies were transferred by army truck from Pokhara hospital to the airport ready to be airlifted back to the capital, Katmandu.

Another three bodies were handed over to grieving families in Pokhara, with others due to follow.

The ATR 72 was flying from Katmandu to Pokhara, a gateway for religious pilgrims and trekkers, when it crashed shortly before 11:00 am.

“I was walking when I heard a loud blast, like a bomb went off,” said witness Arun Tamu, 44, who was around 500 meters away and live-streamed video of the blazing wreckage on social media.

The cause was not yet known but a video on social media showed the twin-propeller aircraft banking suddenly and sharply to the left as it neared Pokhara airport. A loud explosion followed.

Experts told AFP it was unclear from the clip whether human error or a mechanical malfunction was to blame.

The black box from the plane, made by France-based ATR, has not yet been found.

Experts from the French accident investigation agency were due to arrive in Nepal on Tuesday, the body told AFP.

Raj Dhungana, the uncle of one of the passengers, 23-year-old Sangita Shahi, told AFP outside a hospital in Pokhara that his whole family “is in pain.”

He described a “very talented” young woman who was a student in Katmandu and ran a makeup studio while working on an online business platform on the side.

“God has taken away such a nice person,” he said.

According to the Press Trust of India news agency, the pilot Anju Khatiwada joined Nepal’s aviation sector after her husband was killed flying a small passenger plane in 2006.

The sector has been plagued by poor safety due to insufficient training and maintenance.

The European Union has banned all Nepali carriers from its airspace over safety concerns.

Nepal also has some of the world’s trickiest and most remote runways, flanked by snow-capped peaks with difficult approaches and capricious weather.

Its deadliest aviation accident occurred in 1992, when all 167 people on a Pakistan International Airlines jet were killed when it crashed on approach to Katmandu.