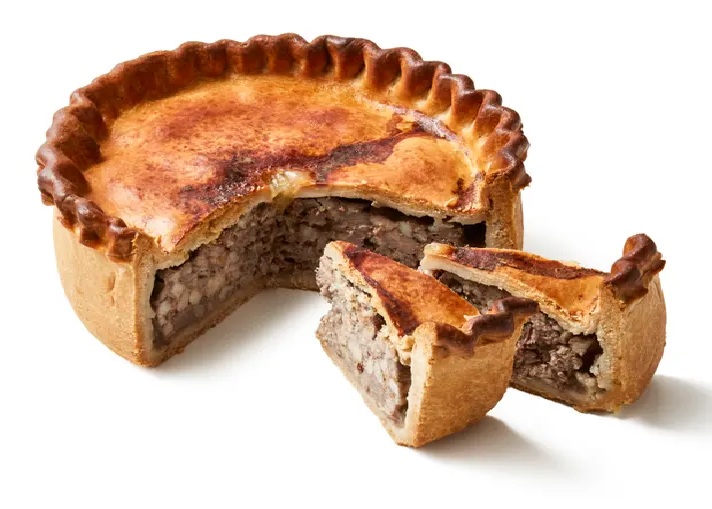 Christmas isn’t Christmas in my family without a vast pork pie, which, unlike the rest of us, becomes increasingly slight as the festivities wear on. For all my mum’s horror stories on the subject, it’s surprisingly simple to make your own – especially if you replace the traditional, and divisive, pork jelly with a quicker, fruitier alternative.

For the pastry
175g lard
675g plain flour, plus extra to dust
1 tsp fine salt
1 egg, beaten with a little water or milk, to brush

Start by preparing the meat. Remove any skin from the two cuts of pork, if necessary, then chop all the shoulder, belly and bacon into roughly ½cm dice. Ask a butcher to mince them coarsely, if you prefer, but I like the rougher, juicier texture of chopped meat here (if the butcher will dice it for you, even better, because this is the most time-consuming element of the whole dish.)

2 Mix with the seasonings

Put the meat in a large bowl with the chopped sage and remaining seasonings – if you’re leaving out the anchovy (a traditional addition – I used Geo Watkins’ Anchovy Sauce, but anchovy paste, chopped fillets or Gentleman’s Relish would also work), you’ll need to add more salt. Mix well, then fry a little in a dry pan and taste to check the seasoning; adjust if necessary.

Put the lard in a medium pan with 300ml water and bring to a simmer, by which point the lard should have melted.

Meanwhile, put the flour and salt in a large bowl. Pour in the liquid, stir to combine, then tip out on to a clean work surface and, as soon as it’s cool enough to handle, knead to a smooth dough.

Heat the oven to 220C (200C fan)/425F/gas 7. Set a quarter of the dough aside, and wrap so it stays warm. Roll out the rest on a lightly floured surface until it’s large enough generously to line a deep, nonstick springform tin about 20cm in diameter, leaving some sticking out the top. Use the excess pastry to patch up any holes.

Spoon the pork filling into the pastry – it will shrink as it cooks, so pack it down firmly. Fold the overhanging pastry over the meat at the edges. Roll out the remaining dough, cut out a circle a little larger than the circumference of the tin, then place on top of the filling.

Pinch together the edges of the case and lid to seal, then crimp all around the edge (there are many videos online), or press down with the flat tines of a fork. Poke a large hole in the centre with the handle of a wooden spoon or similar, then, if you like, decorate the lid with any pastry trimmings.

Bake the pie for 30 minutes, then turn down the oven to 180C (160C fan)/350F/gas 4 and bake for a further hour and a half. Brush lightly with the beaten egg, and return to the oven for another 20 minutes – if you have a thermometer, the internal temperature should read at least 65C. Remove and leave to cool for at least an hour.

While the pie is resting, simmer the apple juice and thyme in a pan until the liquid has reduced by about half. Soak the gelatine leaves in cold water until soft and pliable, wring them out, then stir them into the hot apple mix until completely dissolved. Leave to cool, but don’t refrigerate – you want it to stay pourable.

9 Pour into the pie, cool and serve

Remove and discard the thyme from the jelly liquid. Poke a funnel into the hole in the top of the pie, then pour in a little of the jelly mixture and leave until it’s all been absorbed by the meat.

Repeat until all the jelly mix is used up or the pie is full. Leave somewhere cold to cool and set completely, then slice and serve. Eat within five days.