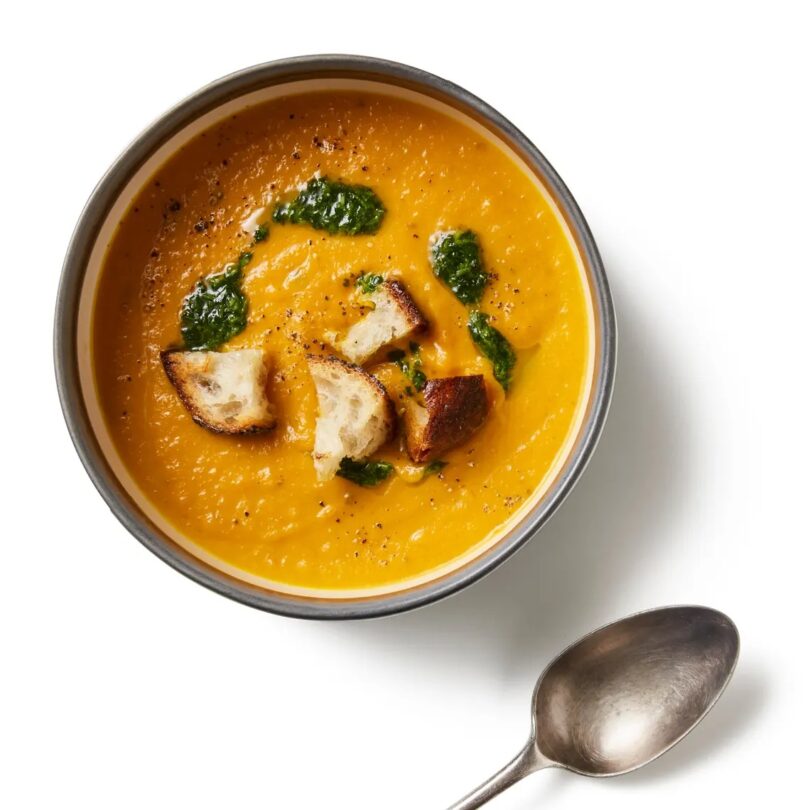 Don’t laugh, but there was a point in my life when carrot and coriander soup seemed the height of culinary sophistication, the rustic carton offering a thrilling glimpse of a world of possibility beyond chunky vegetable soup with its single sprig of curly parsley as garnish. Smitten, I ate the stuff almost every lunchtime for months, and then, as tends to happen with such obsessions, I went off it in the same way I did Archers and lemonade: abruptly and decisively.

Two decades later, however, I’ve fallen in love all over again – with carrot and coriander soup, anyway. Even given the rapid expansion of my palate in the intervening years, it remains an intriguing combination of flavours: the sweetness of the vegetable and the zestiness of the herb, with a simplicity that, in an era when even Cup A Soup comes in 15 different varieties, is almost quaint. These days, though, I prefer to make my lunch, rather than microwaving it. But what’s the best way to recreate the experience?

The more, the better – the soups with a higher ratio of carrot to liquid are proudly carroty, rather than merely vegetal and sweet. As carrots are almost 90% water, however, it pays to get a bit fancy for the very best results. The late chef John Tovey, a familiar face to television viewers in the 1970s and 80s and a great soup enthusiast, sweats them under a cartouche of greaseproof paper in the 1974 Good Cook’s Guide, which contains the first mention of carrot and coriander soup I can find. I can feel you all skipping impatiently over this suggestion, but trust me, it’s the difference between a decent soup and a surprisingly good one.

The version in the New Covent Garden Soup Co’s book, meanwhile, is finished with raw grated carrot, which I don’t recall being a feature of the original, but it does work well in a thinner soup, though, seeing as mine will be thick with carrotty goodness, I don’t think it needs the extra roughage: there’s something very comforting about a thick, velvety pottage in the dark days of winter.

That soup did, however, definitely involve chopped fresh coriander, so I’m surprised to find both Tovey and Nigel Slater’s recipes use the seeds, while Riverford’s Guy Singh-Watson purees a small bunch, and gardener and herb specialist Jekka McVicar puts the roots alone into her soup. Unexpectedly, I prefer the seeds; the slightly bitter, citrussy note they lend it is more complex, and thus more interesting, though, unless you have a very powerful blender, it’s easier to grind those seeds to a powder first, rather than attempting to chase them all down in the pan, as Tovey recommends.

You could, of course, just sprinkle a few chopped leaves on top for emphasis, but I’m going to make them into a vivid, green puree, which not only looks dramatic, but packs more of a flavour punch.

The aromatics and other seasonings

Strictly speaking, Slater’s recipe is billed as a spiced carrot soup, and he adds cumin and chilli as well, while New Covent Garden suggests a sprinkling of nutmeg, which is a nice idea in a creamier soup, though I’m going to keep my version strictly coriander-focused.

Everyone starts their soup with onion; I’ve gone for the red sort, to back up the sweetness of the carrot, but yellow is also acceptable, while garlic adds a welcome sharpness.

As with many vegetable soups, most recipes offer the choice of chicken or vegetable stock, the former, for meat-eaters, offering a more neutral base than many commercial vegetable versions, which taste strongly of dried herbs. Watson’s water works fine if you don’t have either to hand, but stock will give greater savoury depth.

Tovey, characteristically it seems, adds a dash of sherry to the pan, too; it’s a wonderfully 1970s touch, but, while never unwelcome, I don’t think it’s strictly necessary for good results. Nor, indeed, is the milk he adds along with his stock, which, like the New Covent Garden Soup Co’s single cream, serves only to dilute the flavour of the carrots. If you want a richer result, by all means stir some cream in at the end.

Again, I’ve kept my recipe as pared back as possible, but you may wish to bulk out the soup with potato (Singh-Watson) or Slater’s red lentils (an ingredient that goes particularly well with carrots, though this may just be because of their shared colour. The same goes for the orange juice McVicar squeezes into her soup after blending in Jekka’s Herb Cookbook, another clever pairing, though it’s so sweet, it’s better served in elegantly small portions).

Slater finishes his soup with toasted cumin seeds, olive oil and microgreens, Tovey tops his with chopped parsley and serves croutons on the side, and Singh-Watson gives a whole list of garnish suggestions that, in addition to some of the above, includes toasted almonds, orange flower water, walnut, hazelnut and sesame oil and “one heaped teaspoon of ground mixed Moroccan spices, such as caraway and cumin with a little hot chilli”. If you’re short of time, or would just prefer to use that time otherwise (ie, eating the soup), you could easily just sprinkle chopped fresh coriander on top. My bright, green coriander puree is not just for show, however – dissolved in oil, the flavour of the herb is richer, and more intense, than my teenage self could ever dream of.

Cut out a circle of greaseproof paper the same diameter as a large saucepan.

Put the butter in the pan set over a medium-low heat and, when hot, add the onion and a good pinch of salt and cook, stirring often, until soft and beginning to colour – but be careful it doesn’t brown.

Add the garlic and coriander seeds, fry, stirring, for another minute or so, then add the carrots and turn to coat them in the hot fat.

Wet one side of the greaseproof paper, put it damp side down on top of the vegetables, then cover the pot, turn the heat right down and leave to sweat for 30 minutes.

Lift off the lid and paper, then pour in the stock – it needs to cover the vegetables.

Bring to a simmer, then leave to bubble away gently for another 30 minutes.

Meanwhile, whizz the coriander, neutral oil and citrus juice to a puree, then season to taste.

Blitz the soup to a puree (I use a stick blender), then dilute with a little water, if necessary.

Check the seasoning, and serve topped with a swirl of the coriander puree or some chopped fresh coriander, if you prefer.