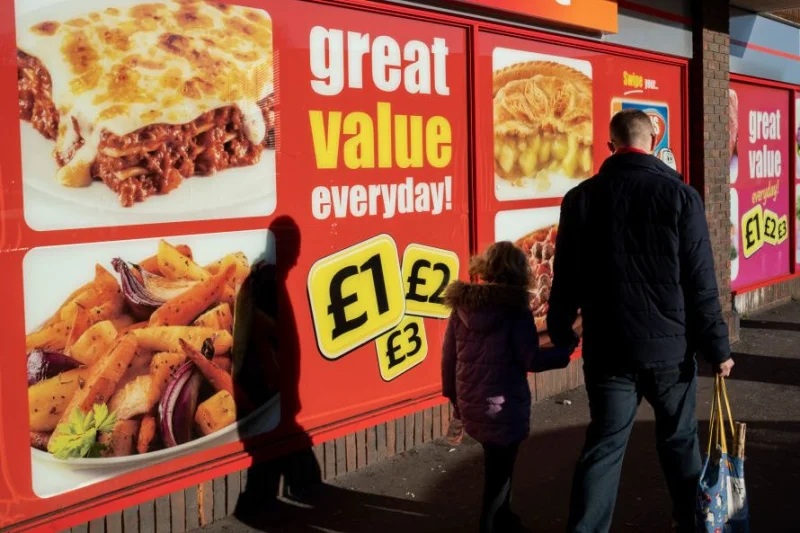 Food inflation in U.K. stores jumped to a record high last month with retailers warning of another year of elevated prices.

The British Retail Consortium said Wednesday that food inflation accelerated to 13.3% in December, from 12.4% the previous month, reaching an all-time high for the index, which started in 2005.

Shoppers spent over £12 billion ($14 billion) on groceries as a result of higher prices, according to separate numbers published by Kantar — the first time the threshold has been breached. The data company said sales by volume fell 1% compared with December 2021 but inflation drove up revenue.

“2023 will be another difficult year for consumers and businesses as inflation shows no immediate signs of waning,” said BRC Chief Executive Officer Helen Dickinson. She cited ongoing pressures from the war in Ukraine pushing up the cost of animal feed, fertilizer and energy.

The cost of fresh food rose 15% from a year earlier, also a record high for the BRC, up from 14.3% in November.

While the BRC said food inflation accelerated, Kantar’s data found it had slightly eased — to 14.4% in December, down from a peak of 14.7% in October.

Furthermore, the BRC said that overall inflation in U.K. stores dipped in December, marking the first decline in over a year. It said shop-price inflation decelerated to 7.3%, down slightly from November’s record high of 7.4%.

The leveling off in prices overall was due to retailers heavily discounting stock in the run-up to Christmas to shift excess inventory. Many stores ordered products earlier in the year, when supply-chain problems still meant long waiting times and before rising inflation began to hurt spending.

The BRC was quick to warn that the dip in prices doesn’t signal an end to spiraling inflation and that retailers may have to put their prices up even more from April once the government’s support on energy costs expires.
Bleak Start

The first months of the year are likely to be bleak as shoppers face credit card bills for their December spend and as energy bills come due. Consumers will prioritize spending on groceries, which are rising in price, while non-essentials like fashion and homewares are likely to suffer, according to Mike Watkins, head of retailer and business insight at NielsenIQ, which produces the data for the BRC.

“The increase in food inflation is going to put further pressure on household budgets and it’s unlikely that there will be any improvement in the consumer mindset around personal finances in the near term,” he said.

Kantar found that shoppers are still adapting to higher grocery prices, buying more own-label goods rather than branded options. Sales of the former category rose 13.3% through to Dec. 25 compared with 4.7% for the latter.

The traditional grocers captured most of the Christmas purchasing, with Tesco Plc, J Sainsbury Plc, Asda and Morrisons accounting for more than two-thirds of all spending. Still, German discounter Aldi recorded the biggest increase in sales at 27%, while Lidl grew almost 24%.

Inflation is “still a painfully high figure at the current rate, impacting how and what we buy at the shops,” said Fraser McKevitt, head of retail and consumer insight at Kantar.