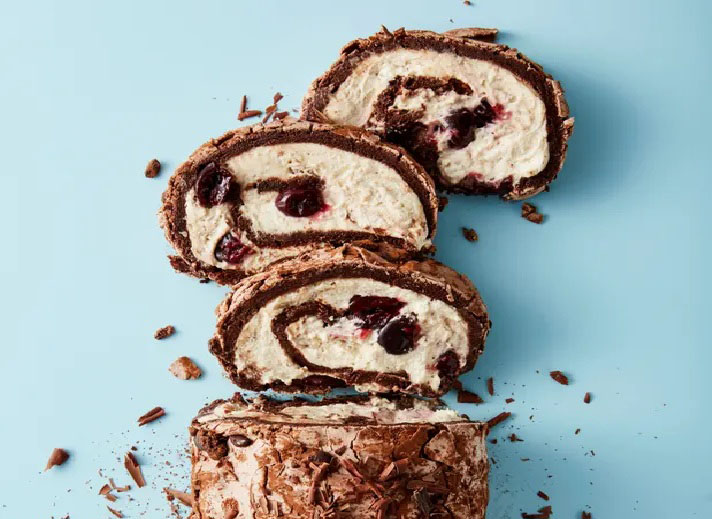 I try to embark on these columns with an open mind: to engage the spirit of strict scientific neutrality in pursuit of culinary perfection. Yet, this week, as I rolled roulade after roulade, whipped cream softly spilling on to the counter in front of me, I realised that I was not only striving towards perfection, but attempting to recreate a very specific, decades-old sensory memory. The first mention of chocolate roulade in the British Newspaper Archive comes in 1976, but references peak in the late 1990s, when they also seemed to pop up at every special occasion I attended as a greedy teenager, often accompanied by an equally modish fruit coulis.

Strictly speaking, of course, a roulade simply refers to anything rolled – beef olives are roulades, as are involtini and that French cream cheese flavoured with herbs and garlic – but these roulades were always both sweet and rich enough to react badly with the ill-advised glasses of wine taken beforehand. They were also so delicious that we didn’t care. But even if you don’t have the same fond memories, a roulade has several things to recommend it as a festive dessert: it’s best made ahead of time, it’s often gluten-free and it looks great. So embrace the retro this Christmas – it’s a classic for a reason.

As if to reinforce the old-school nature of the task, recipes recommended to me by schoolfriends’ mothers include such all-time greats as Delia Smith, Lady Claire Macdonald, Mary Berry, the late Joyce Molyneux and the Leiths Baking Bible, all of which I pass on to you in the spirit of seasonal generosity.

Chantal Coady, founder of Rococo Chocolates, explains in her 2003 book Real Chocolate that as, “for some reason, I seem to be surrounded by people with special dietary requirements”, her roulade is both gluten- and dairy-free, using ground almonds instead of flour. In fact, it turns out that all the recipes I try are gluten-free: Berry and Leiths leave out flour entirely, while Harry Eastwood’s version, in her book Red Velvet Chocolate Heartache, uses rice flour and – in keeping with the wholesome baking theme of her book – grated sweet potato for moisture. Eastwood’s is the lightest, full of flavour but flexible enough to roll up without a single crack, and Coady’s is the densest and richest, with a slightly grainy, nutty sweetness that works well with the chocolate. Unless you’d like that perfect spiral roll, however, I’d recommend keeping things simple by leaving out the flour element altogether; Berry’s recipe wins particular plaudits for its melt-in-the-mouth texture, while some of my testers liked the subtle coffee notes in the Leiths roulade.

That said, none of these recipes quite hits the right notes for me – I remember the roulades of yore having a crisp, sugary shell and a slightly gooey interior, like a rolled meringue, while these are all more like the swiss rolls one might well be tempted to cover with chocolate icing and decorate like a charmingly rustic log. I spend some time fruitlessly attempting to establish the technical difference between a swiss roll and a roulade (and conclude that a swiss roll is simply a type of roulade), before cutting to the chase and tackling a recipe by Melbourne baker Nat Paull that seems to fit the bill. It’s similar to Berry and Leiths, in that it uses whipped egg whites flavoured with sugar and chocolate, but instead of folding in the yolks as well, to create a fudgy result, Paull leaves it as a meringue, making it sweeter, but virtually fat-free. This is the roulade I’ve been searching for, with a crunchy, sugary outer layer that makes a lovely contrast to the rich, bland creaminess of the filling, and both tempered by the bitterness of the chocolate. Bullseye.

Note that making such a roulade is a good way to free up egg yolks for custard, which is always welcome, but if you’d prefer not to be stuck with leftover yolks, you can buy egg whites in cartons at larger supermarkets.

Both Berry and Leiths use melted chocolate in their batters, while Eastwood and Coady go for cocoa powder (Molyneaux writes in The Carved Angel Cookery Book that, “many years ago, I used melted chocolate in the sponge mixture for the chocolate roulade and very good it was, too. But I now use cocoa instead, which I think is even better, giving it a bittersweet taste”. If you’re making a sponge version, then melted chocolate will make it richer, because it adds fat as well as flavour. But for the meringue version, which I’m going for, the cocoa butter will be the kiss of death, because that fat will pop the air bubbles you’ve whipped into the egg whites, and leave you with a flat, chewy end result. On the advice of Anna Higham, pastry chef and author of The Last Bite, though, I can’t resist adding a few chocolate chips as well, as well as some mixed spice. Well, it is Christmas, after all.

The simplest option is Berry’s whipped cream, though my testers prefer Leiths’ slightly sweetened version. Consider the cream a blank canvas, however – I try whisking some ginger wine into one batch (the syrup from jars of ginger would also work well, as would rum, whisky or brandy) and orange zest into another. Alternatively, double down on the chocolate element with Molyneux’s extremely rich chocolate mousse, or Coady’s intense (and dairy-free) water ganache, which can also be flavoured with tea, coffee or indeed “cardamom, orange flower water, a drop of essential oil or some bits of fruit or some booze”.

I like the contrast between the blandness of the cream and the sugariness of the meringue, however, so I’ve kept my filling quite plain, with the exception of the chestnut puree used by Eastwood, which adds a festive nuttiness without adding too much sweetness, and Paull’s fruit, which adds a welcome sharpness and a splash of colour. The shops are full of lovely jarred fruit at this time of year, though defrosted berries would also work a treat. Happy Christmas!

Sift the cocoa and mixed spice, if using, into a bowl and set aside. Chop the chocolate into chips, if necessary.

Put the egg whites in a large bowl or food mixer with the salt and cream of tartar, whisk to soft peaks, then gradually whisk in the sugar until the meringue mix is thick and glossy and falls in ribbons off the whisk.

Add the cocoa and most of the chocolate chips, then fold in until well combined, taking care not to knock out too much air.

Spoon the meringue on to the lined tray in a single layer and gently smooth the top, to level it out, while keeping in as much air as possible.

Scatter the remaining chocolate all over the top, then bake for 30-40 minutes, until the meringue is dry to the touch on top but still squidgy beneath. Remove and leave to cool on the tray.

Once the meringue is cool, start the filling.

Beat the cream until it’s billowing and soft, then fold in the chestnut puree and taste – it shouldn’t be too sweet, because it will be paired with the meringue, but adjust if need be.

Put a large sheet of clingfilm (you could also use greaseproof paper or a tea towel, but I find that clingfilm is easiest here) on a work surface and dust all over with cocoa powder.

Carefully turn the meringue out on to it, with the long sides parallel to the long sides of the clingfilm, then turn it around so that one of the short sides is facing you. Score a shallow cut across the width of the meringue, about 2cm away from the end closest to you.

Spread the cream all over the top of the meringue, then scatter over the fruit, if using, and put a line of fruit roughly where you scored the cut: this will be the centre of the roulade later.

Using the clingfilm to help you, tuck the closest end of the meringue over the line of fruit, then roll the whole thing up as tightly as possible, finishing with the seam underneath. The roulade should be completely encased in clingfilm, and can now be refrigerated until ready to serve, and ideally for at least two hours.

Transfer the roulade seam side down on to a platter, unwrap carefully, dust with more cocoa powder and serve.