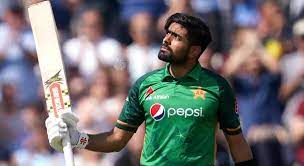 DUBAI: Pakistani skipper Babar Azam has been nominated for the International Cricket Council (ICC) ODI Player of the Year award for the second successive year.

Babar, who won the prestigious award in 2021, has been nominated this year too following his sublime record in ODIs with Australia’s Adam Zampa, Zimbabwe’s Sikander Raza and West Indies’s Shai Hope as the other three nominees.

The top-ranked ODI batter, who has been ruling the rankings chart since April 2021, accumulated 679 runs in nine matches.

Babar carried on his astounding form in the 50-over format and crossed the fifty-plus score eight times and converted three of those into centuries. Babar finished the year with a stunning average of 84.87.

“The ICC Men’s ODI Cricketer of the Year 2021 is in the running to do a repeat in 2022. Pakistan captain Babar Azam once again showed his prowess in the 50-over format,” said ICC in a press release.

“It was a memorable year for Babar as captain of the Pakistan ODI team, winning three series out of three. Pakistan were unstoppable in the ODI format, losing just one match (against Australia) out of nine,” the statement added.