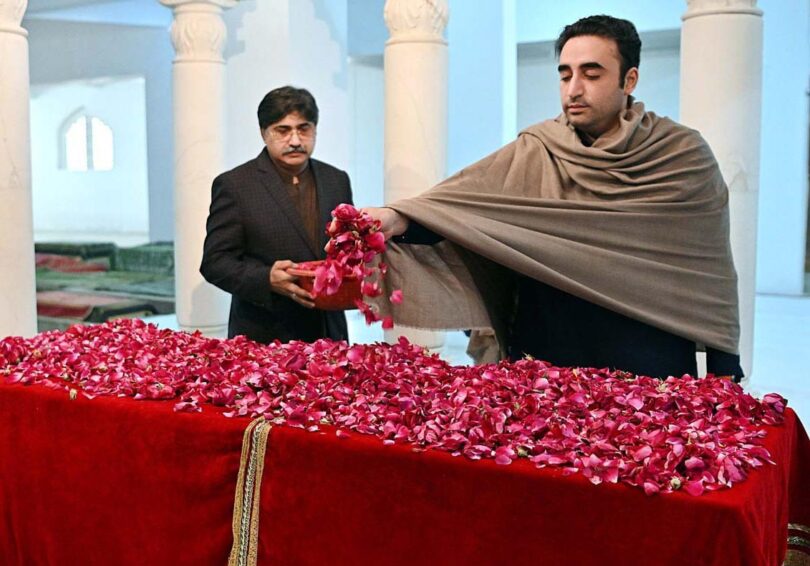 F.P. Report
LARKANA: Chairman of Pakistan People’s Party and Foreign Minister Bilawal Bhutto Zardari has said that if the general elections are held in the country on their scheduled time, then there will be no facilitators of Imran Khan in any institution at that time.
According to a Press release issued by Media Cell Bilawal House, talking to the media after visiting the newly-constructed modern Trauma Center at Chandka Hospital, the PPP Chairman said that Imran Khan wants a dictatorship to come to power through the backdoor. He said that Imran Khan’s biggest concern is that after the departure of his facilitators from the establishment if the elections are held on time, his facilitators from other institutions will also leave adding that this is the reason why the PTI chairman is now using all kinds of tactics including lies, hatred, division, and arson to call for an early election.
Chairman Bilawal Bhutto Zardari said that all remnants of Musharraf, including Imran Khan, are now a story of the past, and if they do not support democracy and its development, and their narrative has been that the army should help him so that he can turn institutions into his personal Tiger Force. If he is plotting to become the prime minister again through this Modus Operandi then it is authoritarian and undemocratic thinking adding that the people of Pakistan have always defeated the undemocratic and selected forces whenever they have had the opportunity.
Foreign Minister further said that the general elections in the country will be held on time as per the constitution and law. He said that it is the success of our struggle that earlier assemblies were dissolved after every year or two, but now two assemblies have completed their term from 2007 to 2018, while this third assembly is also going to complete its term. If the Parliament completes its third term, it will be a great victory for democracy, he added.
Bilawal Bhutto Zardari, while appreciating the construction work of the Trauma Center and the process of installing modern equipment there, said that the Center has been built on modern and international standards. In 2018, it was known that the conditions of Chandka Hospital are quite bad, as people from Larkano as well as Qamber Shahdadkot, Jacobabad and even from Balochistan and South Punjab come here for treatment. He said that we are grateful to the Chief Minister of Sindh and the Health Department that they have made the Trauma Center functional with international standards. This Center will be linked to Karachi’s Trauma Center, while the Rescue 1122 ambulance service is also launched. He said that the number of ambulances has been increased, and I want ambulance service to be available like in Karachi in other major cities of Sindh, Hyderabad, Sukkur and Larkana. He said that this network will be extended to all divisional headquarters in the first phase and then to the district level for facilities like Trauma Center in Karachi.
He said that the resources are few and the need is high, but health facilities are gradually improving in Sindh. Most difficult situation is in an emergency, and the Government of Sindh along with Child Life Foundation has brought the emergency facilities for children to international standards.
Meanwhile, Chairman Bilawal Bhutto Zardari visited various departments of the Trauma Center of Chandka Hospital and appreciated the passion and dedication of the staff.