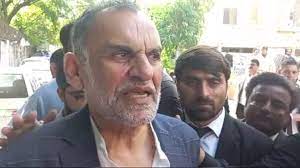 During the course of proceeding, Special Prosecutor Raja Rizwan Abbasi read out the FIR’s contents against Mr. Swati and said the accused had committed a crime twice while giving disrespectful statements on Twitter.

The accused both times had tweeted through his verified account and he didn’t even denied it, he said, adding that whether a responsible citizen could use such language, the accused had adopted.

The prosecutor said thousands of people were following the accused on Twitter, adding that what kind of message was being conveyed through social media against the state institution.

The accused tried to spread hate among his followers against the officers of the state institution, he said, adding that the FIA was authorized to conduct investigation on the controversial tweets.

The prosecutor prayed the court to grant more time for further arguments in the case. The defence lawyer said Azam Swati’s tweet was not on the record, adding that the tweets were done from three different accounts. His client had only given answer, he said.
The lawyer said that Mr. Swati used to tweet by himself but he never answered to any tweet. The verification of the tweeter account should be observed firstly before proceeding the case, he said. The lawyer said that the bail petition was filed on December 2, and the decision was still awaited. He prayed the court to announce its verdict on the same date.

The court, however, adjourned hearing of the case till Wednesday. Judicial Magistrate Muhammad Azam Khan heard the case. (APP)